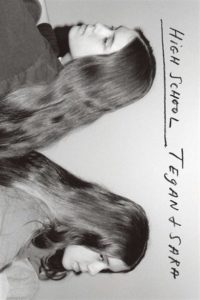 Dancing (or crying) to songs by Tegan and Sara is practically a rite of passage for queer women and girls in Canada and beyond. Both Vancouver-based twins have been open about their sexuality since their music career took off in 1998 and they quickly became icons for the LGBTQ+ community. But before “Closer,” before “Boyfriend,” before the Grammy nomination and the inception of their LGBTQ+ advocacy foundation, Sara and Tegan Quin were just everyday sisters growing up in Calgary, Alberta. Their new memoir, High School (Simon & Schuster, 2019), guides readers through the tumultuous halls of Crescent Heights High as the sisters find love, drop acid, and pick up the guitar.

Told in alternating perspectives—one chapter is Tegan’s, the next Sara’s—the memoir spans grades 10 through 12. By the end, the Quin sisters are beginning to emerge as the queer rock stars that we know today. Though the conclusion is no surprise for Tegan and Sara fans, the raw emotion and honesty of their shared memoir never fail to captivate. The stories that earned High School a 2020 Alex Award (given to adult books with special relevance to teens) offer comfort to people who may be having similar experiences and are as relatable as the duo’s hit songs.

Tegan and Sara found the beginning of high school a bit rough. They struggled to fit in, and their initial escape was taking acid. On their first day of grade 10, the principal warned the class that drug offences would be taken seriously. Tegan quipped to Sara and their friend Kayla: “I’m serious about drugs too.” Getting high brought the twins together, but it also got them in a lot of trouble when their parents discovered that they had been sneaking out to raves. High School treats drugs seriously as well: neither moralizing, nor minimizing the risks. Though Tegan and Sara eventually quit acid, their openness about their adolescent adventures brings a nuanced and honest lens to the conversation.

Sara was the first to get a girlfriend, though she kept the budding romantic and sexual nature of her relationship with Naomi behind closed doors. Tegan dated a boy initially, but the relationship raised more questions than it did strong feelings: “Why, if I liked Spencer, didn’t I desire him?” she remembers wondering. Not long after their breakup, she fell for a friend too. Though today Tegan and Sara stand together in their LGBTQ+ advocacy, the twins’ early struggles with sexuality were separate, each unsuccessfully concealing their relationships from the other, and from their parents, instead of bonding over it. The blush of first love, as well as the internal struggles with what it might mean for their identities, are told in brave, emotional detail.

Though they would go on to forge a successful career together, as teenagers Sara and Tegan fought a lot. They shared friends, but often couldn’t handle sharing the phone, and were as fierce to each other at home as they were fiercely protective of each other outside. Their shared passion for the guitar—a passion they stumbled across towards the end of grade 10—brought them together in practicing and songwriting but also gave them new territory for argument. Sara remembers her hypersensitivity to criticism after they won their first music contest, in contrast to Tegan’s happy confidence, observing, “It was as if each of us were only capable of hearing what the other wasn’t.” One of the strongest aspects of High School is that readers get to know Sara and Tegan as individuals, not just as the harmonies of Tegan and Sara.

Yes, this book deals mostly with secret girlfriends, late-90s raves, and the first cassette-tapes of recorded songs Tegan and Sara sold to their friends, but High School is so much more than sex, drugs, and rock and roll. A portrait of identity development and evolving family ties, the sisters’ memoir gives die-hard fans the details they crave and pulls in new supporters with gripping emotion. If you listen to the audiobook version, you can hear some original recordings of their first songs, and the print edition has plenty of old photos. Though the book stands on its own, their album Hey, I’m Just Like You (Sire Records, 2019) includes re-recordings of some of their earliest written songs with the added depth of mature voices. Just as those songs are still relevant twenty years later, Tegan and Sara’s honest and perceptive account of their high school days are fresh and relatable.