What could go wrong? Sure, go for it,
commission the services of some software
to sail the edgeless expanse of algorithms
on a mission to discover why humans believe.

Douglas Adams was right: the only meaning of life
we are capable of finding equals 101010.
It is such a surprise, isn’t it?, when a child of Deep Thought
calculates that people can be manipulated.

Tweak a social factor there, a political one there,
and you have the power to move people between
religion and atheism. All Things Bright and Beautiful
are rendered great or small. The map approaches

the size of the Empire. Next step? A better UX
so a layperson can change the variables —
the funding proposals could call it METPHR.
So turn your keys to power, step right up

enter your vectors, calculate your result,
and don’t forget to save and print,
tear off the sprocket edges, tuck it into the pocket
of your expensive suit and away you go.

(Author’s note: In Douglas Adams’ sci-fi magnum opus The Hitchhiker’s Guide to the Galaxy, the supercomputer named Deep Thought calculates the answer to “the Ultimate Question of Life, the Universe, and Everything” as “42” (or 101010 in binary). More information on the Modeling Religion Project can be found here.) 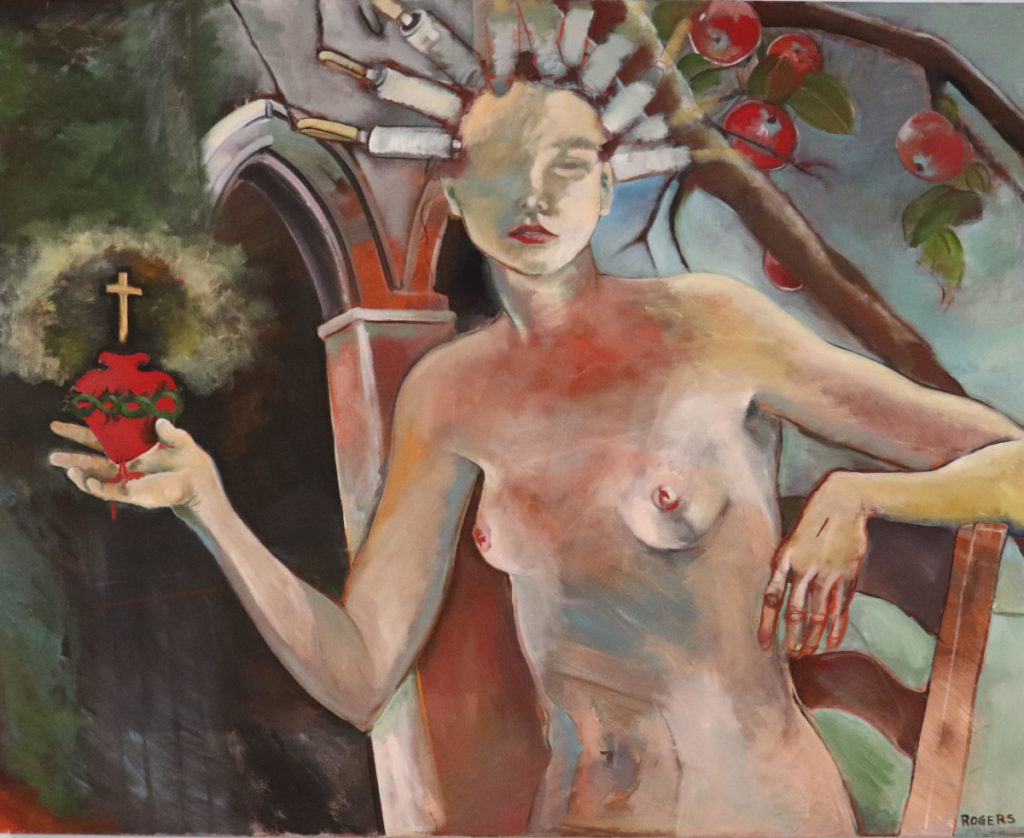 An Ecumenical Embrace by Su Rogers (Art Bank of NS)

A Warrior Queen in the Age of Vogon Poetry

Ah, how to explain to you, Warrior Queen,
your name has just been invoked by a bot
generating poetry by fictional expansionist aliens?

Welcome to our millennium, Mother of Forsaken Queens.
Here, you’ll need more than a dart and a lioness-like stare
to pry out some truth from beneath the strata of ironies.

In our defense, oh Razer of Imperialist Ambitions,
the Victorians were, like, totally way worse than us —
we are too self-deprecating to do any real damage.

But the Victorians cast a statue of you guarding London.
Remember that place? That hive of imperialist scum
you burnt to the ground? Yeah, that’s the one.

So what, oh Lover of Liberty, if our laughter
echoes over us in eternal loops of self-referentialism?
The feedback only hurts a little. And, besides,

out of evil absurdity flourishes. Out of tyranny irony buds.

Author’s note: In Douglas Adams’ The Hitchhiker’s Guide to the Galaxy, the poetry composed by Vogons is the third worst in the universe and used as a form of torture. In 2016, 38 years after the original Hitchhiker’s radio play aired, the Vogon Poetry Bot began generating computer-written poetry on Twitter. In 2020, almost 2000 years after her death, Queen Boudica of the Celts was dubiously honoured as the subject of one of the Vogon Bot’s “poems.”

One thought on “Two Poems”