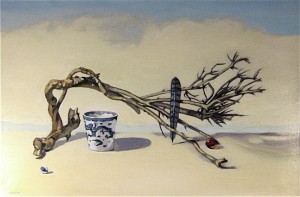 This year, 2014, is the year to read women authors—or so declares writer and illustrator Joanna Walsh. Her campaign began modestly: a few New Year’s “cartes de voeux” with a suggested reading list and a #readwomen2014 hashtag on Twitter.

The Guardian picked up the story in January, however, and readers, writers, booksellers, and literary journals have since joined the challenge if not to read women exclusively, at least to read and promote more women writers than in previous years.

Why? Because to date, newspapers and magazines have marketed books by men more vigorously than books by women.

The US organization VIDA, Women in Literary Arts, has kept track of the numbers since 2010; their most recent report was released yesterday. VIDA’s now-famous pie charts show that, in general, publications review more books authored by men than books authored by women. In some cases, the difference is striking. For example, the New York Review of Books reviewed 307 books by men in 2013, but only 80 books by women.

Canadian Women in the Literary Arts (CWILA) keeps similar stats. Some Canadian literary publications, The Walrus and This Magazine for example, reviewed more books by women than by men in 2012. But the big newspapers, the Globe and Mail and the National Post, reviewed far more books by men.

Book reviews are important. They guide readers and buyers who then guide agents and publishers—who, in turn, release more books into the market. Publishing more reviews of books by women and reading more books by women will help shift that cycle in new directions.

Of course, we’re doing our part here at Understorey Magazine. In this, our second issue we feature both new and established women writers, as well as women visual artists, from across Nova Scotia, from Yarmouth to Cape Breton.

Thank you and happy reading!

Mary Reardon is a native of Halifax, Nova Scotia, and graduated from the Nova Scotia College of Art and Design with a Bachelor of Fine Arts in 1993. Her work has been the recipient of numerous awards and she has exhibited in galleries in Nova Scotia and Toronto as well as internationally. She has most recently exhibited in solo and group shows with the Nova Scotia Art Sales and Rental Society. Her work is in private and corporate collections nationally and internationally, and with the Nova Scotia Art Bank. Mary presently lives and works in north-end Halifax. “In my work I am concerned with creating visual metaphors that describe the moment when something is remembered or forgotten. The intricate network of trees is used to re-create the interwoven process by which our minds store and retrieve our memories. The titles of my ‘Branch’ series are composed to reflect the complex and poetic nature of the process.” Please see more of Mary’s work on her website.