Don’t cross those tracks,
Stay on that side of the overpass.

A diverse community with lots of culture.
A Canadian heritage site like no other.

Welcome to the Pier Dear,
That was something you’d always hear.

Like many families that settled in Cape Breton,
Parents came to work, and then sent for their children.

They worked at the Steel Plant, Coke Ovens and the Coal Mines.
West Indians in the blast furnace: they could take the heat high.

Some families didn’t have much.
But they invited you in, shared stories and fed you lunch.

I remember in my day, my mom would always say, for a dollar
You can get a bag of chips, soda and chocolate bar, with change left over.

You can always count on people from the Pier.
You get a smile, hello, how are you, and who’s your mother and father dear?

The Pier had businesses on every corner.
Barber shops, bakeries, grocery stores and plenty more.

We built churches, schools and community halls, so we would have a place to go.
Immigrants built the Pier from the ground up, many years ago.

You could visit Arties & Fred Tommie’s to get your daily cup of tea.
Men and women dancing around, jiving, doing the swing.

The Kabana Club, Clipper, and the Thistle were also places to be.
Putting hard-earned money, ching, ching in the slot machines.

We raised artists, athletes, cops, doctors, and lawyers.
Teachers, musicians, politicians and so much more.

A time when neighbours knew each other.
Welcomed everyone with open arms, and built friendships forever.

When I was young I had so much fun.
There was one-cent candy, and five-cent bubble gum.

Who remembers picking berries on blueberry hill?
Picked all day, ate until we were ill.

Children playing outside until the street lights came on.
You would hear parents yelling, Wanda, Marie, Jack, Noreen:
It’s time to come home.

The Pier Day Care, United Mission and Whitney Pier Youth Club
Were a part of every child’s childhood.

Community Hall field trips, coming back all muddy.
The looks on our parents’ faces were frightening, but funny.

Running to Pier Video so we can throw quarters in the gumball machine.
Praying we would win free popcorn and movies.

Kids from all over Sydney would come to the Pier for the Menelik Hall dances.
Everyone got along, no one focused on our differences.

Want to learn some history?
Head to the Whitney Pier Historical Museum.

You could look out your door or walk down the street.
See adults and children talking and laughing, the sounds were sweet.

Oh the things I would give to live in Old Whitney Pier. 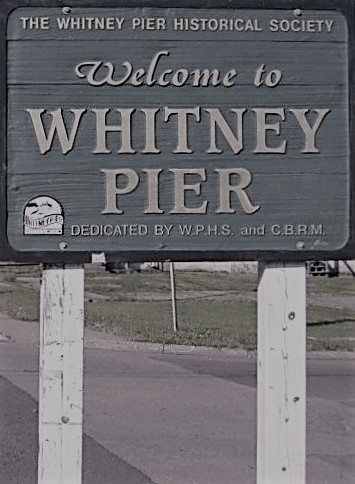