No more gloomier monster … and scourge sent by the god’s wrath
ever mounted from the black stygian water–flying things
With young girl’s faces, but foul ooze below,
Talons for hands, pale famished nightmare mouths.
—The Aeneid

She agreed to drop charges against her father, come
home. Imaginary charges, her mother said. But not
imaginary friends. They invited her. To Craigflower Bridge.
That’s a pretty name. A name that sings. I’ll buy a stuffed bear
for my foster mother, she said. But first, a party.
Missy invited her. Down Reena’s arm a path
of needle marks. In and out
of foster homes. Three schools in one year. Ask
who molested her. At fourteen, she could not get clean in any bath.
No more gloomier monster … and scourge sent by the god’s wrath.

Home sobbing. An ugly,
they called her at school. Bearded lady.
Her twelve-year-old body
heavy and large as a woman’s.
But then she got friends. They invited her.
The ones who set her hair blazing like fiery wings,
kicked her, burned cigarettes on her forehead, slammed her face
into a tree, broke both legs. Broke
her back. Nothing deadlier—see what dark brings—
ever mounted from the black stygian water–flying things.

Flying rage? Were they all girls, enraged? No,
Warren was there. He lived with his father
in the trailer until his father left.
When Reena dragged herself across the bridge
(she still could walk) Warren followed. Was his blow
so fierce it left boot marks on her skull? No,
that was Kelly’s. Stay home Reena’s uncle said.
But she left to meet those girls, pretty ones all in a row
with young girl’s faces, but foul ooze below.

Kelly cracked her skull. Who held Reena
under water? Let her up, one said.
No, she deserves it.
Why? Kelly asked when the judge
sentenced her. I didn’t kill her, I just beat her.
(Followed her, finished her off.) She muttered oaths.
No remorse, no goodbye?
No mourning? No ceremony or beating drums
or offerings from north or south?
Talons for hands, pale famished nightmare mouths. 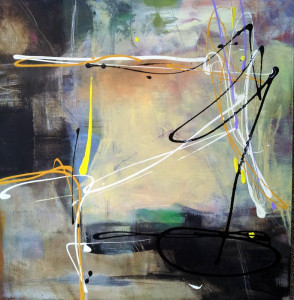 Across a Brook by Lisa Wright