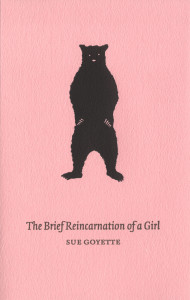 In The Brief Reincarnation of a Girl (Gaspereau Press, 2015), Nova Scotia poet Sue Goyette delivers a long form poem about a four-year-old Massachusetts girl who died after prolonged exposure to a cocktail of drugs prescribed for bipolar disorder and ADHD. Her parents were subsequently convicted for the murder.

The book is set mainly in the court room during the trial and includes the conversations, thoughts, and actions of the parents, lawyers, doctor, judge, jury, and witnesses — as well as the ghost of the girl.

Goyette does not simply reiterate this story for empathetic purposes. Through surreal language and metaphor, she shows the reader an alternate reality, asks questions, and looks for answers as to how a tragedy like this can occur. Readers watch the human characters interact, but much like stepping through the looking glass, we also see societal actors at play: poverty, childhood, mental health, technology, and the social, education, and health systems — to name a few.

Of these characters, poverty feels most prominent. It is a school yard bully we all recognize, whether as victims or as witnesses who stand back to watch. In The Brief Reincarnation of a Girl, poverty swoops around the courtroom and is partially deflected by gavels and prescriptions pads. Yet poverty, Goyette shows, can eat you alive: “No one ever thinks / of the edge being so close. Or the drop so sudden.”

In Goyette’s hallmark style, seemingly nonsensical language and tangential references layer the poems with meaning and challenge readers to absorb each word and scene. While logic tells me, for example, that a kitchen colander cannot strain heartbeats and a bear cannot keep this girl alive, through Goyette’s language, I understand more than ever what is happening at this trial. Goyette’s words are a terrifying reminder of how children are often at the mercy of adult lives and how complacency can make us oblivious to an upside-down world where a preschooler can be failed by so many people.

Indeed, the presence of the girl as a ghost throughout the trial needles both readers and the living characters in the narrative: “The ghost of the girl hoisted the shovel to show / the jury what had been prescribed to her. She tried / telling them that all she could do with this shovel / was to dig holes she kept falling into….” The image is haunting, the girl’s reality so far down, so clouded by medication and a mental illness that might or might not have existed. Through this powerful and counter-logical portrayal of a tragic reality, the girl is given body and voice and a piece of her, as well as lingering questions about illness, authority, and social structures, are placed in us all.