E. Alex Pierce is the author of Vox Humana, published by Brick Books (2011). Her poem, “Medway River, Carousel,” won the Readers’ Choice Award in the Arc Poem of the Year Contest, 2013. Her work has been widely anthologized, most recently in Untying the Apron: Daughters Remember Mothers of the 1950s (Guernica, Ed. Lorri Neilsen Glenn) and in Undercurrents: New Voices in Canadian Poetry (Cormorant, Ed. Robyn Sarah). She holds a Master of Fine Arts degree in Creative Writing from Warren Wilson College, NC, and has been a participant both in the Writing Studio at the Banff Centre and the Poetry Colloquium at Sage Hill. For ten years she taught creative writing at Cape Breton University, and then returned to Sable River to develop E. Alex Pierce Writing & Editing. She works as an in-house editor for Boularderie Island Press and conducts manuscript review workshops throughout Canada. Photo credit: Les French. www.ealexpierce.com www.brickbooks.ca 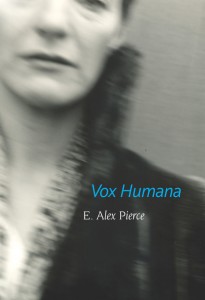 “Last Summer in the Old Craig House” from Vox Humana

Musk melon, moth skirt, with those skin-like petals that come in pink and white.
Mauve pink, for musk, our mother, that summer our brother was born.

Gold spun hair on the gun-metal green lilacs, put there to help the fairies build
their houses. And fairy-rings she found in the mossy woods. She was certain of it.

We were two lost princesses travelling with her in her last bid for freedom
while she still ran wild in the meadows and woods-roads,

traipsing us down through the salt marsh to sit on Craig’s Beach
and have royal cups of tea, red Kool-Aid that ran in streams

down our white shirts. It was our last summer in that house,
the end of our reign – he came in August, late August.

They put a Union Jack out on the clothesline up the road.
To give birth – to a son.

Lying in that brass iron bed –
now, she was Queen.

E. Alex Pierce: Much of what I write springs from my life at Sable River, Nova Scotia: I can see the salt marsh and the mouth of the tidal river from my upstairs windows. The village is much the same as it was when my grandparents (all four of them) lived here. I grew up in the nearby town of Liverpool, and spent weekends and summers at Sable with my family. “Last Summer in the Old Craig House” comes from an early memory of one of the houses we stayed in. I left Liverpool at sixteen to study music at Mount Allison and later got involved in the theatre and made that my profession. Decades later I had a chance to buy my grandmother’s house. I live there much of the time now and recognize that this landscape formed a great part of my inner life. I have photos of me at seven weeks in my mother’s arms outside the house where I live now.

My mother spouted lines as if they were
her own: “I could compare thee,” she might say,
Shall I compare thee to a summer’s day?
The poem’s truth came later, here, or there,
she’d grafted life to art – the darling buds
of May were mine, his gold complexion dimm’d,
my father’s secret way. The eye of heaven
shined on us – and her, until the stroke
that found her vein and played its course
took all her words away. My love for her
was locked inside the poem then–but now
I read to her, and she responds to sound
without the sense, receives the lines she gave:
conceit of childhood – all at once unmade.

E. Alex Pierce: Vox Humana felt like the right title for this book. As well as “the human voice,” its more direct meaning, vox humana also refers to an organ stop that I knew from the pump organ in our parlour. It’s a reedy sounding stop that is said to resemble the singing voice. For me, poetry is voice in that what I write is always something that can be spoken rather than something that is read and understood only in the mind. The words take up physical space and have substance and sound. You could say that the poems in Vox Humana are close to theatre because there is always the sense of a human voice breaking through the poetic form.