Chelsey Purdy is the Coordinator for the NSERC PromoScience Two-Eyed Seeing Camp, a summer camp for Indigenous youth that integrates Indigenous Knowledge and Western science.

Chelsey Purdy is the Coordinator for the NSERC PromoScience Two-Eyed Seeing Camp, a summer camp for Indigenous youth that integrates Indigenous Knowledge and Western science, now in its third year. Chelsey is a recent graduate of the Applied Human Nutrition program at Mount Saint Vincent University. She is currently living in Halifax and recently started a MSc in Nutrition at the Mount. Chelsey grew up on the South Shore of Nova Scotia and is a member of Acadia First Nation. In her role as coordinator of the Two-Eyed Seeing Camp, Chelsey works with three Mi’kmaq communities in Nova Scotia, including her home community of Acadia First Nation.

Chelsey spoke with Understorey Magazine about Two-Eyed Seeing, the summer camps, and her experiences in a university science program.

Understorey Magazine: Can you tell us about Two-Eyed Seeing or Etuaptmumk?

Chelsey Purdy: In short, Two-Eyed Seeing (Etuaptmumk in Mi’kmaw) is viewing the world through one eye with the strengths of Indigenous ways of knowing and the other eye with the strengths of Western ways of knowing. Navigating both perspectives can be tricky at times, due to the extroverted nature of Western approaches to communication. Western perspectives have a tendency to dominate or override Indigenous perspectives in many forums. Indigenous scholars have described this as a modern form of colonization. In addition to this, Western science historically separates and categorizes things in an effort to understand the world. This approach makes it difficult to combine things that don’t fit in a predetermined or accepted scientific category. Those who are guided by Two-Eyed Seeing strongly believe that, to get the whole picture, we must draw from both Western and Indigenous perspectives, with deep respect for what each one offers.

Based upon the teachings of Albert Marshall, I have come to understand that Two-Eyed Seeing is inherent to many Indigenous people, and especially Mi’kmaw people, who have had to weave between both perspectives since the arrival of Europeans. However, navigating spaces that are Western dominated is still a difficult feat for many Indigenous people, as their values and perspectives are sometimes not appreciated in Western-dominated settings. Two-Eyed Seeing offers a framework where these values and perspectives can be integrated with Western views, creating opportunity for new ideas, co-learning, and reconciliation.

UM: How is Two-Eyed Seeing part of the process of the summer camps?

CP: The Two-Eyed Seeing Camp is a partnership between Sipekne’katik First Nation, Pictou Landing First Nation, Acadia First Nation, Mount Saint Vincent University, and Mi’kmaw Kina’matnewey. The camp is funded by the Natural Sciences and Engineering Research Council (NSERC) PromoScience Program, Canadian Roots Exchange, and (most recently) Medavie, due to an active partnership with their Breakfast and Beyond Program.

For me, the most important part of my role as coordinator is finding balance between community needs and institutional regulation. Much of this involves facilitating communication between outcome-oriented procedures and the relationship/process-oriented community. Finding this balance, as well as building reciprocal relationships, is at the core of Two-Eyed Seeing and the camp program.

When it comes to camp activities, we integrate both Indigenous Cultural Knowledge and Western science into curricula. In one of our activities called Mijipjewey na Pisun or “Food is Medicine,” we explore fish as a traditional food, how to fillet a fish, and the nutritional science behind fish and other traditional foods. In another activity, we explore the physics behind the sounds of different hand drums by recording and analyzing the sound waves of drumbeats.

UM: Is there something that surprised you during the camps? A reaction or realization or process that you didn’t expect?

I have been involved with the Two-Eyed Seeing Camp for three years now (as a student employee, intern, and now coordinator) and I learn something new each day. Much of this learning comes from working with people, including Elders or Knowledge Keepers, community members, academics, and university staff. While I learned things like grant writing, program administration, and how to do presentations when I was a student, this program is teaching me how to apply these teachings in the community and learn new life skills that connect me deeper to my Indigeneity. Some of our main partners include Mi’kmaw Kina’matnewey and the community education directors. Working with these partners, and with my supervisor, I have also learned a significant amount about curricula and education.

UM: You have a science-based university degree. Were you able to integrate Two-Eyed Seeing into earning that degree and/or can you foresee integrating it into your career?

As Mi’kmaw woman who has been taught and brought up with a predominately Western perspective, I did struggle with learning about Two-Eyed Seeing in a university setting. As I had more opportunities to learn with and from communities, I learned how both perspectives could be brought together. As part of my undergraduate degree, I completed the internship education program (a requirement for becoming a registered dietitian) and was able to complete my community nutrition placement with the Two-Eyed Seeing Camp. I also completed my honours thesis on examining and understanding how collaboration in science outreach programing for Indigenous communities has been applied. In these ways, I was able to bring Two-Eyed Seeing into my university degree. I have recently started a Master of Science in Nutrition Degree at Mount Saint Vincent University, and plan to continue my involvement with the Two-Eyed Seeing Camp during my studies. I also know that I’ll bring Two-Eyed Seeing to whatever career I end up in.

UM: How do you think Two-Eyed Seeing could/should change the way our federal government and other decision-makers deal with complex issues like climate change and ecological collapse?

Actually, I recently had the pleasure of interviewing Elder Albert Marshall on the topic of Two-Eyed Seeing in my role as Two-Eyed Seeing Camp Project Coordinator. During the interview, Albert touched on biodiversity, climate, and more. We will be sharing this interview through social media and other websites and I believe that some of his wisdom can be used to answer this question.

From my perspective, inclusion of Indigenous communities, people, and perspectives in decision-making processes is a must. To do this, inclusion has to be discussed, as it may mean different things to different people. Many decision-makers are currently non-Indigenous people, who historically have not effectively consulted with communities about things that ultimately affect them. This is seen across Turtle Island (including Canada). Google “environmental racism” and you will have more than enough examples. In the same vein, I will highlight the work of some amazing African Nova Scotians and Mi’kmaw people as shown in There’s Something in the Water. This film gets at the very heart of what I am trying to describe.

I cannot stress enough the importance of including Indigenous communities and people in the planning, execution, and evaluation of programs and policy. Exclusion or inclusion effects the environment, education, food security, and health. Indigenous communities/groups/people need to have a voice in decision-making, not only about the environment, but about our health, access to food, education, and beyond.

One of the many reasons I have stayed with the Two-eyed Seeing Camp Program and Mount Saint Vincent University for my graduate studies is the program’s devotion to answering the Truth and Reconciliation Calls to Action and the space they have given me to develop the voice I share with you today. 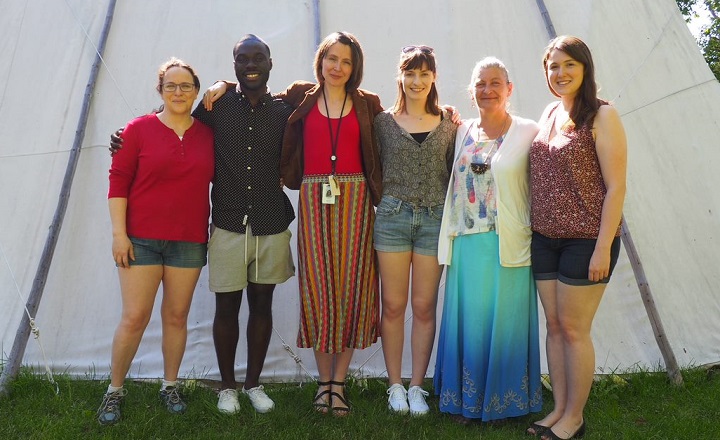