Corey Levine has worked on human rights issues in conflict zones around the world. She is currently on assignment in Mali but usually hangs her hat in Victoria BC where she contemplates the state of the world on daily walks at the beach with her cousin’s dog.

I am holding the court papers in my hand. Never did I imagine it would come to this.

I think back to the first time I met him—he was seven, I was ten. It was at a Chinese restaurant on the main street of Fredericton, the kind that served sweet and sour fried chicken balls with the unholy orange sauce that was popular in the 1970s.

My mother’s colleague organized the meeting. Did he know that it was a de facto interview for a new family? Although it was done with the utmost of secrecy—an “accidental bumping into” at the restaurant—I suspect he realized in the recesses of his seven-year-old brain that he was on display for us.

He was boisterous and restless, what would probably be labelled ADHD today. Yet, behind the rambunctiousness, there lurked an unsettled, hostile force. Did my ten-year-old mind detect this or is it framed by adult hindsight?

He ate exuberantly although I am sure most of the tastes were completely foreign to him. Between mouthfuls, he showed off a toy he had received for Christmas. While my siblings and I technically had veto power, in reality we knew that there was no sense in raising any objection: he was about to become our younger brother.

I remember the day he came to live with us. He was just about to turn eight; I, eleven. It was something we had in common, birthdays in the same month. The green VW Beetle pulled into the driveway of our home, mid-afternoon. Out he tumbled with all his worldly possessions: one small yet sturdy suitcase and a giant stuffed animal, given to him as a parting gift, as if to say bon voyage.

My heart broke at the sight of his meagre possessions. I was humbled and guilt-ridden at the thought of the house behind me filled to the rafters with stuff, when he had so little.

At first, like a new pet, he was a novelty—entertaining with his jokes about kings on their “thrones” (I learned that boys never grow tired of poop jokes) and his energy, playing for hours on end with his new Tonka trucks in the backyard.

Then the legacy of his childhood began to rear its head. He was the product of teenage parents, at first shunted between relatives and then sent through an ever-revolving door of foster homes. His anger at being so unwanted in the world took on a more visceral, physical response as he grew older. His fists became a weapon of choice in expressing the rage he didn’t understand and I, three years older but not much bigger in size, a convenient punching bag.

In a household already filled with physical and emotional chaos, we were not equipped to deal with the fallout of his neglected childhood. I skim a memory off the percolating surface of my own childhood.

I am lying in a snowbank, red parka against a freshly powdered white backdrop. My brother, jeered on by his friends, has just beaten me up on the way to school. I wait until I hear the scrunch of their boots fade away, weighted by the shame and humiliation of what has just taken place, before I can pick myself up and make my solitary way to class. I am grateful no one asks questions about the bruises beginning to turn the sides of my face a molten purple.

Although the settings change, it’s a scene often repeated over the years. I am nineteen before I stop being afraid of his fists. I am home from university and although he still gets angry, I see he has learned to lash out with his voice instead. Still, I instinctively shrink from the words of wrath and livid face whenever he vents his anger.

Gradually though, the jagged peaks of rage soften and time smooths out the dark crevasses of fury. A genuine fondness for each other replaces the childhood yoke between tormentor and the tormented.

I am amazed by the culinary skills that he seems to have plucked from thin air. He is ever the “mechanical genius,” as my father likes to call him, a blessing in a family that can barely figure out how to operate a toaster. It becomes a family joke: a pitch for a new Martha-Stewart-style DIY show that highlights the range of my brother’s talents—from inventing household gadgets and building furniture to crafting recipes for tasty homemade confections and canning organic tomatoes. 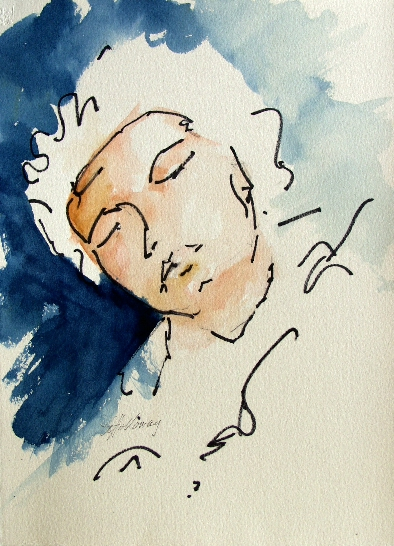 He is impressed by my career too, a whirlwind of airplanes and countries as I travel the world with the United Nations. I enjoy bringing him mementos from my travels: silk rugs from Iraq, handcrafted boxes from Sierra Leone.

It is now a relationship built on stabilizers, phone calls on birthdays and in the next port of call between trips home. He visits me in Ottawa many years later and presents me with a ticket to Phantom of the Opera at the National Arts Centre. I become teary-eyed at the thought that somehow we have managed to survive the upheavals of our early years and climb into a life raft together. It feels miraculous.

But then the miracle crumbles once again. I see that it is a mirage instead: shimmery, bathed in a golden glow, yet elusive and ultimately out of reach.

The cracks appear slowly at first, almost imperceptibly. We are standing on the stairs of our childhood home. He is yelling at me for some forgotten infraction. I am exhausted, having been up most of the night with our mother, who lies dying in a room below. I am not afraid that he will physically strike me, but his anger is real, palpable and directed at me. He is using his size and the chaos of the moment to put me in my place.  That moment passes but the sensation of his belligerence lingers for a while longer.

Our mother dies. The animosity that my brother had exhibited in his early years reappears toward the rest of the family, but not yet with me. The familial pressure valve begins to hiss in earnest when care for our father becomes an issue. Leaks, then ruptures appear in his relationships with my other siblings. Still, he invites me to visit him at his cottage to heal my wounds after a disastrous posting in Afghanistan. Is this his unspoken mea culpa to me for the years when his fury and his fists were his most memorable traits?

Our father is rushed to hospital suffering from pneumonia. My brother wants him to remain in hospital post-convalescence; I would like him to be cared for in his home with the same loving attention we provided to our mother during her dying process. But I know that underneath these disagreements over sick, ageing parents lurks the broken bones of a neglected childhood that have never properly mended. The peaks of anger and hostility re-emerge from the past. It’s as if he is the seven-year-old boy again, feeling unwanted and unloved, shoved into a family container that is already filled with strife and unhappiness. Though the wounds have now split open on all familial fronts, I cling to the mirage of the life raft we built together.

Then the doorbell rings. As if culled from the latest courtroom drama, I am served with papers from my brother’s lawyer. I feel the heft of the documents in my hand. He has used the courts to transmit his pain, demanding his siblings be ex-communicated from the care and welfare of our father. All contact between us abruptly stops. The legal system becomes a giant X-ray machine held up for the world to see, a portrait of a broken family unit—a messy web of ghostly breaks. Affidavits are the X-rays through which every crack, every splinter, of the family skeleton is captured. And even without a doctor’s diagnosis, I know the X-rays will confirm that the fractures can’t be healed.