Dawn Hurley-Chapman writes in between serving up coffee and homemade soup at her cafe in Toronto's east end. She holds an honours degree in English Language & Literature from University of Western Ontario and attended University of Toronto's School of Continuing Studies in Creative Writing. Much of her writing springs from her experience growing up in suburban Ontario, her travels, and the inspiring, off-beat people she has met. Her work is published in Women Travel: A Rough Guide Special, Quality Women’s Fiction (UK) and Cargo Literary. In 2017 she was awarded a Toronto Arts Council grant for her novel in progress, The Orphan’s Edict.

Once upon a time on a warm autumn night, a girl was born on a farmstead in Craigleith, Ontario.
Orchards surrounded the farmhouse and the air was ripe with the scent of blood and fallen apples.

The doctor observed the baby lying in the palm of his hand. Said, “Best not to feed her. Just leave her on a pillow near the open window. She’s much too tiny to live through the night.”

But the baby didn’t die. She grew into a woman who was small, but mighty. When she turned sixteen, she left the farm for the city to find work. She waited on tables in a café where she could watch the ships come in as she poured re-fills of thick, black coffee. She had a child. Years later, her child would have a child. Me.

This much is true. 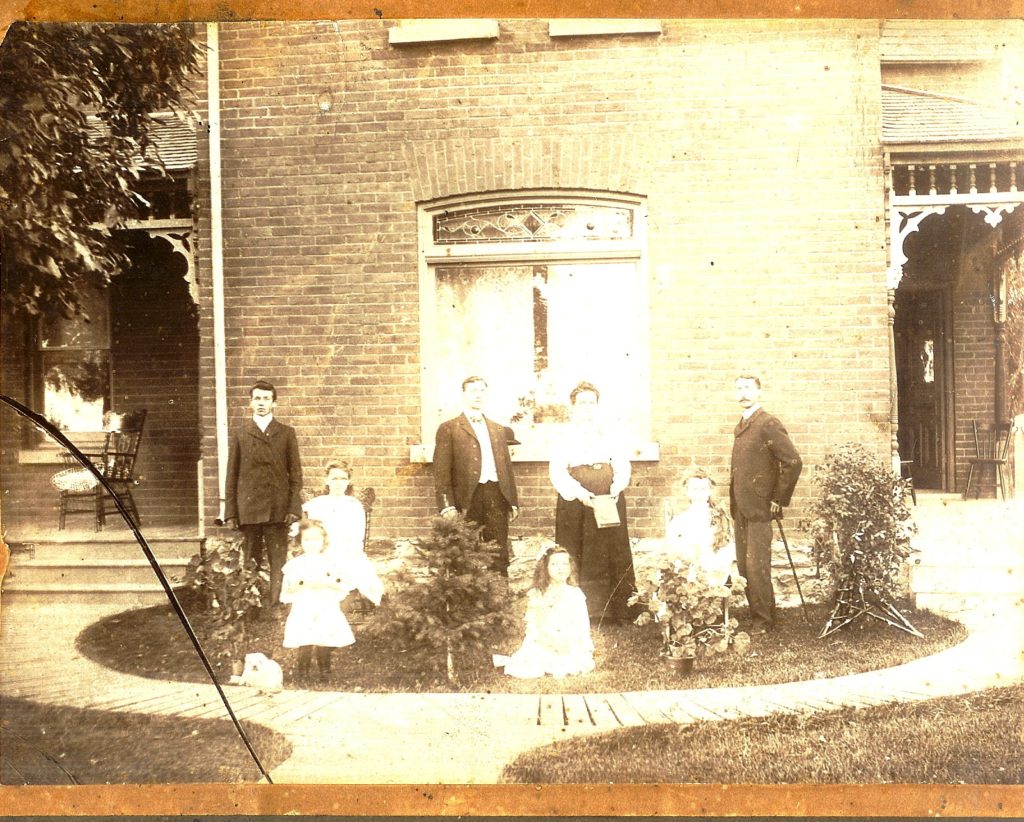 Both Cinderella and Snow White are victims of wicked step-mothers: sharp stab of poisoned apple in the throat, the burn of lye on red-raw hands.

Step-fathers or step-grandfathers (even secret ones) rarely figure in fables. We therefore don’t know how they would relate to the main character. Good or evil? Divine or dastardly?

Gill Road is named after my great-great-grandfather, Perry Gill. He begat Whitford and Ermiza who begat Anne who begat Clarence, Howard, Alberta and Mabel. There’s a pioneer cemetery down the hill from the farm. I play among the weed and wildflower, reading the tombstones like braille. Grandma says she has a little sister sleeping under the moss. There’s no marker because she died before she was baptized.

In the farmhouse kitchen, molasses drips thick from the measuring spoon into the broad-brimmed bowl. Outside, barn swallows chatter and help hang laundry on the line. Grandma, in her mint-green dress and daisy print apron, shows me how to measure the bran, sift the flour, fold in the buttermilk. I run my finger along the side of the bowl and lick the batter from sticky fingers. She says, “I had four marriage proposals you know. One of them was from a millionaire.”

Grandpa sits at his desk while we bake, Bible open, scratching out his Sunday sermon.

“Fewer than one in four Americans now believe the Bible is the actual word of God and should not be taken literally word for word. Similar to the 26% who view it as ‘a book of fables, legends, history and moral precepts recorded by man.'”
—Gallup Poll 2017

In 1969, with the slogan “The state has no business in the bedrooms of the nation,” Pierre Trudeau’s government introduced the Omnibus Criminal Reform Bill, legalizing abortion, divorce and birth control.

But in 1949, section 251 of the Criminal Code implied that women who have abortions could be charged with breaking the law.

Mabel’s lover visits her in hospital, a wave washed to shore only to pull out again on the next tide. The baby begins to wail, scared of the man’s faceless shadow silhouetted against the wall. He ignores the girl, says, “I’d marry you Mabel, but I don’t want a child.”

After he leaves, two different nurses offer to adopt the baby, so Mabel could be free to run away with the handsome Irish? Greek? Italian? man who had come to visit. The faceless man hadn’t begged, and he only asked once, and this was not enough for the woman who survived her first night on earth being left on a pillow to die.

A bastard shall not enter into the congregation of the Lord.
—Deuteronomy 23:2 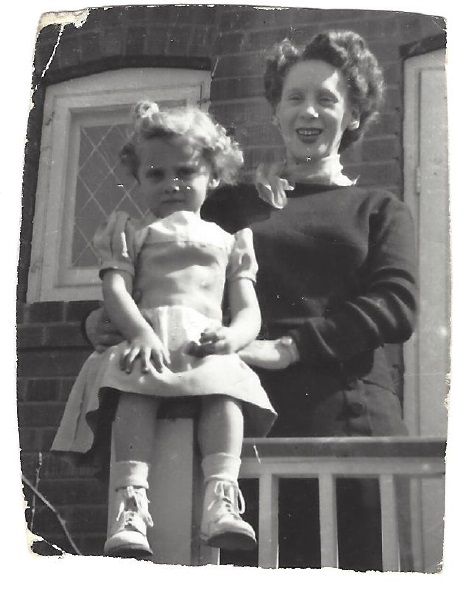 Once upon a time, there was a young man named Arthur, who was engaged to be married. He lived with his mother in a bungalow in Etobicoke. A woman and her six-year-old daughter rented out the basement. The little girl’s father never came around and the woman, Mabel, didn’t wear a ring. Even though the woman was ten years older, and his mother thought she was a loose woman, Arthur knew he’d never love anyone more, so he broke off his engagement and asked Mabel to marry him.

Adopting my mother, Violet, would be a small price to pay for true love.

“Mom,” I asked, “Why do Grandma and Grandpa both have blue eyes and you have hazel?”

The laws of genetics state that eye color is inherited as follows:

1. If both parents have blue eyes, the children will have blue eyes.
2. The brown eye colour gene (or allele) is dominant, whereas the blue eye
allele is recessive.

Therefore, if a child born to two blue-eyed parents does not have blue eyes, then the blue-eyed father is not the biological father.

Marrying a family is not a bad thing, but can be a beautiful thing. I wish this blessing for you.
—Of Human Bondage, Somerset Maugham 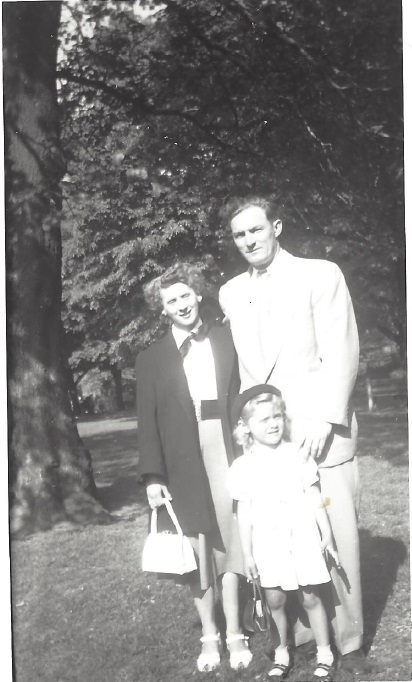 Some believe the expression “Blood is thicker than water” originally derives from the biblical phrase “The blood of the covenant is thicker than the water of the womb,” implying that the currently accepted meaning is the opposite of the original intention.

My mom snuggles into my dad’s shoulder as we walk from the farmstead along Gill Road to the general store. “I want an ice cream daddy,” she says to him in her little girl voice. I am eight years old and quiet for my age.

What a girl has when she is rejected by her father. Often results in her having trouble finding a significant other and trusting people. Girls with Daddy Issues will sometimes marry older men.

My mother carried the secret of her faceless father like a slow-growth cancer. She burned the paper trail to the blood truth. I sift through the cold cinders till my fingers are grey with soot, knees red and raw.

In the orchard, I climb into the gnarled arms of an apple tree and pluck a piece of ripe, red fruit. A snake drops down from the branch above, flicks its forked tongue and hisses, “Tasting of its flesh won’t give you the answers you seek.”

I ask, “Do you know who the faceless man is?”

“He moves in and out of shadows. He swims in your blood, and that’s all you’ll ever know.”

“But if I eat of the fruit, won’t I know all things good and evil and all that lies in between?”

The snake laughs, “You’ve been reading too many stories.”

Fable is a literary genre that illustrates or leads to a particular moral lesson; however, this style of story-telling has gone out of fashion.

Grandma at ninety-two taps the bedcovers, her body cradled in a field of polyester violets. She beckons for me to lay down beside her. She’s grown tinier still, but heavy with secrets. Her skin smells of lavender and talc. We curl around each other, fetal. A story with no moral and no neat ending, waiting to be born.