Deb lives in southwestern Ontario with her husband, her cat, and too many raccoons. Her stories have been published in several places, including The New Quarterly, CommuterLit, From the Cottage Porch (Sunshine in a Jar Press), and You are Not Alone (One Thousand Trees). Last spring, she placed second in the Toronto Star’s 2020 short story contest.

We have a mouse in the house this morning. It found the bread I’d left out to thaw for the boys’ toast. Spring is a strange time of year to be invaded by mice. Maybe her food source ran out. Maybe she has a litter. Too bad. I take some butter and smear it on the trap. This is a day for killing. The mouse may as well go too.

I wonder how many laboratory mice are dying in the fight against COVID-19. Hundreds, if not millions, I guess. Not to mention the ferrets, and cats and chickens and maybe a dog or two. At least they are dying for a purpose.

Ian comes in for breakfast as I’m hiding the trap behind the stove. Levi is with him of course. He follows his father everywhere—to the barn to help with the pigs, to the shed, to the fields. I keep telling him he has do well in school if he wants to be a farmer some day. He tells me he just has to watch Dad.

I send Levi back to wash his hands again and I look at Ian. “Not today,” I tell my husband.

He doesn’t look at me, just sits down, reaches for the milk and pours it onto his oatmeal. “He has to learn some day. It’s not like he hasn’t seen it before.”

“Levi’s only nine. He’s staying in the house. It’ll be hard enough without having him watching.”

“It doesn’t matter who’s watching. Anyway, he can help.”

No reply. Just the sound of the spoon scraping the empty bowl.

My cousin’s son is a chemical researcher in the US. He had to scale back his mouse colony because his students are not allowed to come to the lab. Scale back. That’s a nice term. We’ve all had to scale back at one time or another, haven’t we? Nothing to get upset about. Maybe that’s what I’ll call it.

Breakfast is over. Ian tells Brian to put down his phone and get going. He tells Levi to stay in the house. I try to thank him with my eyes, but he’s not looking at me. 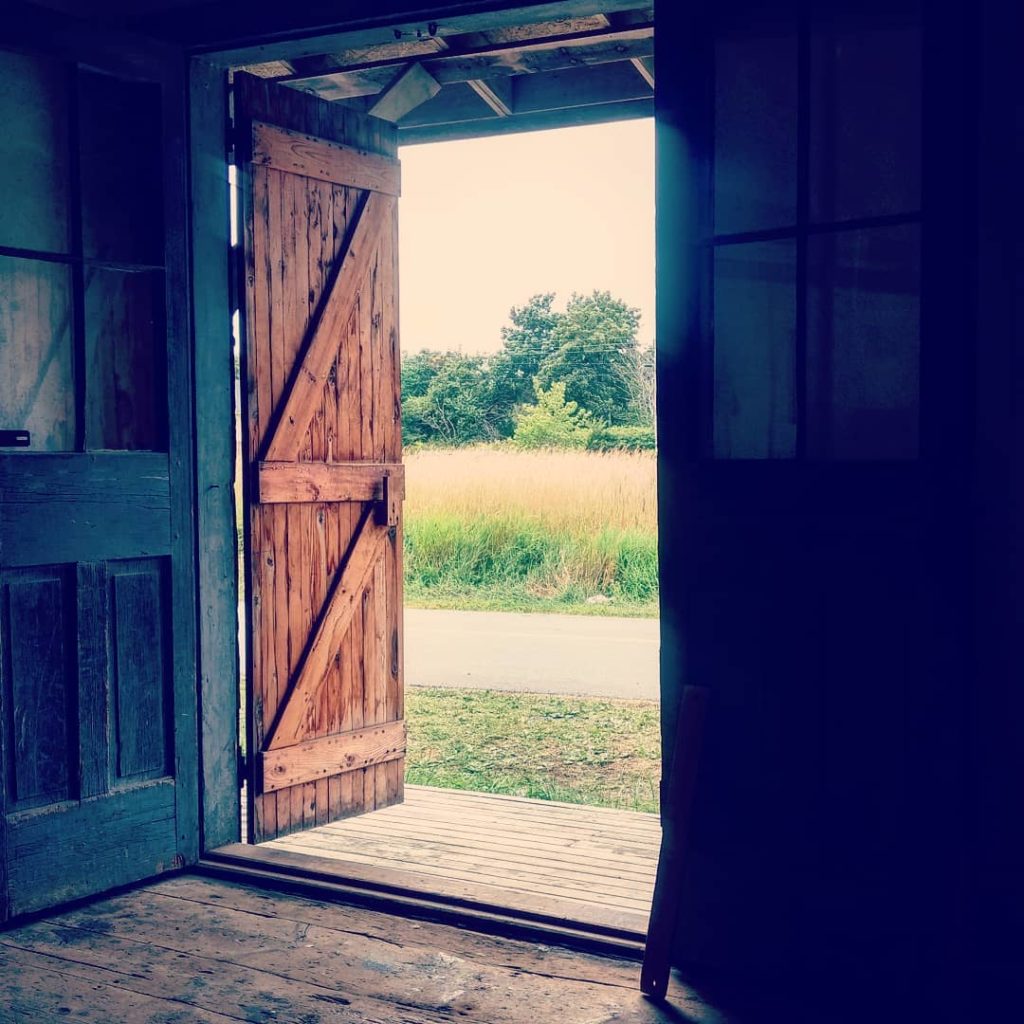 My View for the Afternoon by Anne Macleod Weeks

According to our On-Farm Written Euthanasia plan, veterinary approved and meeting all the requirements of our national standards of care, we humanely euthanize very young pigs using blunt trauma. In other words, we pick them up by their hind legs and crack their heads against the edge of the concrete pen. It takes force and determination to do it right, but it’s quick. When an animal is sick or suffering, it’s only right.

Today is not right. That’s what I’m thinking.

“How can you?” they ask. My non-farming friends, the students in my grade 11 class, the anonymous voices on Facebook and Instagram where I share information about our farm, trying to educate the consumer as we’ve been told to do by the experts. Sometimes the question comes from genuine curiosity. More often it’s from horror and disgust. “How can you kill those creatures you are charged with protecting?”

I used to try and explain that farmers accept death as a part of life. That we believe the animals have a purpose and are there to be used. That there’s tremendous satisfaction in knowing you’ve given your animals the best care possible and in knowing they are going to feed others. Now I just say lots of animals eat other animals and we take pride in making sure our pigs are well looked after. Neither answer seems to make much difference.

The warmth hits me as I walk into the barn. Quickly we change into our coveralls and boots and pull on our facemasks. Then we head down the hall to the nursery.

Brian is lagging behind a bit. He’s fourteen. So far, he’s been all bravado about this. I wonder if it’s starting to sink in. “You doing okay?” I call back.

“What? Yes.” He catches up. He’s grown again and his coveralls are short. I tell myself to pick him up some new ones the next time I’m in town.

Brian wants to take over the farm someday. He’ll need to learn many things. About animal care. About business. About running machinery and leading people and whether to plant today or hope the rain holds off so the field can dry just a little bit more.

And he’ll have to learn there are times when you are revolted or even terrified by what you will need to do. Times when, no matter how much you want to walk away, the voice in your head will remind you there’s no other choice and no one else is coming to help so you might as well get on with it. Times like now.

What will this day do to him, I wonder? To my husband? To husbands and children across the country, all who are in the very same situation? According to the rumours, tens of thousands of pigs will be destroyed. Pigs that were raised for a purpose, but in the end had none. We are at the door now. I look over my shoulder to see if Ian is ready. He nods. His face is hidden by the mask but I can see his eyes. He looks tired. No. For the first time, he looks old.

I reach for the door handle. From the other side, I can hear soft grunts and movement of the pigs. There’s a tiny squeal. My hand drops. I start to shake. I clench my hands and close my eyes. Through the roaring in my ears, I hear Ian. “Are you okay?”

“I’ll do it. You go back to the house.” His voice is brusque.

Later, I head to the house while Ian and Brian finish cleaning up. I pull out the mousetrap and put it away. Just for her. Just for today.