Jane Eaton Hamilton is a Canadian author and activist. Her writing has won or been nominated for numerous awards. The following article, first posted February 5, 2016, is reprinted with permission from her website. Background on the on the Jian Ghomeshi trial is available on Wikipedia.

Jian Ghomeshi, you [redacted]. I don’t know you very well, but I know this: one night in early 2004, after I’d been awarded a writing prize in Ottawa, you followed me to a side room annexed to the main hall, where I’d gone to get away from the crowds, and while my (then) wife was in the bathroom or off getting another drink, I’m not sure, you put your hand on me. That hand. One of the very hands that is being discussed in court this week. You closed the distance between us and you massaged my shoulder/neck while talking to me about how I needed to relieve the stress of my big win. Eventually my (then) wife returned, you dropped your hand (that hand), and we smiled politely and “uh-huh’d” while you bashed the Rockies, BC and, in particular, Vancouver.

You didn’t ask me if you could massage me. I guess you assumed you could touch me. The way men, the entitled 50%, have always assumed they could access women’s bodies at will. You were a star, and your status helped me to tamp down my resistance. I don’t know why the hell you picked me, as I had just been on stage thanking my (then) wife; I was obviously queer and out and significantly older. Maybe I was just the only woman alone during that function? I do know that a number of other men, and people elsewhere on the gender spectrum, have previously in my life singled me out for non-respectful interactions. The truth is, I did not step back, Jian Gomeshi, you [redacted], and I excoriate myself for that now. I should value myself more.

I was taught to be polite. I was taught to smile and nod and always, always be friendly. I was told that friendliness could get me out of pinches, even save my life, and indeed, through the years, this mostly proved to be true. Doing what men tell you to do is just a good idea. Not doing what they tell you to do can be disastrous.

I wish it weren’t so, because they would be illuminating, but stats for close calls don’t exist. The binds we’ve escaped because of our own instinct or intelligence or cunning remain undocumented.

Let me talk about what you touching me was and was not, Jian Ghomeshi, you [redacted]. Because you had followed me and waited until I was alone to approach, what you did was strange and mildly unsettling. I felt a sense of disquiet. But given my sexual orientation and marital status, I also didn’t take what you did particularly seriously. That night I stayed up with another Canadian literary luminary getting drunk and laughing until 4 a.m. He certainly didn’t massage me and I’ve never written a post about his bad behaviour, nor would I. Guess why? There wasn’t any.

Okay, Jian Ghomeshi, you [redacted], I get that what you did to me was not a charge-able assault, or, arguably, even an assault. I didn’t take it as one, then, and I don’t now. But I’m going to tell you what it was. It was the something else that so many of us experience 1000 times a year as Canadian people assigned female at birth, and trans–and let’s name it for what I now believe it was: the prelude to a potential assault.

The preludes to potential assaults are these: language or behaviour or touching that create in their targets vague senses of unease that we “get over” as the day or week wears on. There is so much of this kind of crap slung in women’s directions in the average day that often we don’t even bother mentioning an encounter. We don’t tell our spouse. We don’t tell our employer. We don’t call a friend. Because these little infractions against our sovereignty, these thousands of small infractions, intended to train us to patriarchy, are par for the course. But we all understand what they’re actually telling us: they’re actually reminding us about what could happen.

A year before you massaged my back, Jian Ghomeshi, you [redacted], you allegedly hurt Lucy de Coutere. And there were alleged other victims, too. With that same hand you extended to me. With that very same hand you used to caress me. If the allegations are true, you wrapped that hand around victims’ throats and choked them. If the allegations are true, you used one of your hands to slap and punch your victims.

But guess what, Jian Ghomeshi, you [redacted], let me tell you something about society. There are lingering effects to minor harrassment. Harrassment is a bridge built of a substance called continuum that Canadian women walk over every day of our lives from the day we are pushed into our pink worlds to the day we close our eyes the last time. And on that bridge are guys, nice guys, scum nozzles, and turds rolled in sprinkles. On that bridge of spectrums are guys (and some others) with their hands out, fingers waggling. Guys demanding we pay the toll. We’ll let you cross, they say, but only if you’ll smile. Only if you’ll give us a little kiss. Only if you’ll stop a minute and chat. Only if you’ll go home with us. If you want an “A.” If you want that promotion. Only if you get scared, because we appreciate scared. Only if we get to bash you in the head, throttle you, rape you and leave you for dead.

They say, We know you like it. They say, You asked for it.

It does all that because it’s meant to do all that. That’s exactly what it’s for.

The truth is, we aren’t fully enfranchised members of society, Jian Ghomeshi, you [redacted].

This all has a name, this systemic oppression. It’s called misogyny, and in Canada we need an inquiry* to untangle its octopedal arms so we can root it the hell out of our country, and unfasten our institutions from it. Imagine the productivity here if all our population was equally enfranchised. Not 50%, or 60%, or 80%, but 100%?

Because right now, in part because of you, Jian Ghomeshi, you [redacted], we people who’ve experienced violence are triggered. We are not just thinking about your behaviour, and your lawyer’s behaviour, we are thinking of so many other times in our lives where someone else has behaved badly, where someone didn’t respect and honour us.

This collective will says, We are mad as hell and we’re not going to take it anymore.* Pretty soon, if we have our way, you guys with your baitings and assaults are all going to tumble off that bridge and drown in a big cold ocean of women rising up.

Jian Ghomeshi, you [redacted], ours is a world that celebrates the male. You know what else is part of our oppressive system? Not letting women drive, or vote, or own property, or go out without male accompaniment. Saying that girls are not good at math, giving girls passive toys, not letting women go to unversity, glass ceilings, few female politicians, women earning less than men for work of equal value, women bearing the brunt of child-rearing and housework, women who perpetuate stereotypes even as they obtain jobs where they could change them.

All that stuff we call sexism? That is just misogyny written in semen. Men like you built the world. You built it to work for you. And it works for you most of the time.

We are mad as hell and we’re not going to take it anymore.*

Some men are up in arms this week, cautioning Canadian women to calm the fuck down. Don’t get your sweet little heads all in a tizzy, they say, in Canada we have something called due process. This is supposed to happen to complainants in court. Ultimately, it protects all of us.

In Canada, during due process, victims get psychologically battered, and we, the potentially violated, are standing upright while court is in session, quite out of order, and questioning that. We are saying This is not okay. This is an abridgement of Canadian values and Charter freedoms.

We are saying to the survivors of spectrum violence and to the brave, fierce women in court: We believe you and we stand with you and our support will never waver.

Jian Ghomeshi, you [redacted], isn’t this quite the amazing system men have developed for themselves over the centuries? This system where women are achingly vulnerable, taught from a young age to submit, while the other half of the population (and a few strays from our side) takes advantage? Because let’s face it, what our patriarchy requires more than convictions, and we all know it, is an intact status quo.

So Jian Ghomeshi, you [redacted], thanks for the back rub. But just so’s you know: I’m an anti-fan.

*A Canadian inquiry on misogyny is the idea of barbara findlay, QC

*adapted from “Network,” the movie

Canada is Raping You

This talk talks about violence as a men’s issue and I recommend it highly: Jackson Katz’s Ted Talk

If you are trying to understand abusive minds, I recommend this book highly, whether your abuser is a man, a woman or someone on the continuum: Why Does He Do That? Inside the Minds of Angry and Controlling Men, by Lundy Bancroft

Here is a very good blog post about this situation: Bone, Broth and Breastmilk

For people worrying about due process, this article, citing rape conviction stats in Canada: 1 in 1000: What’s Really on Trial in the Jian Ghomeshi Case by Anne Kingston 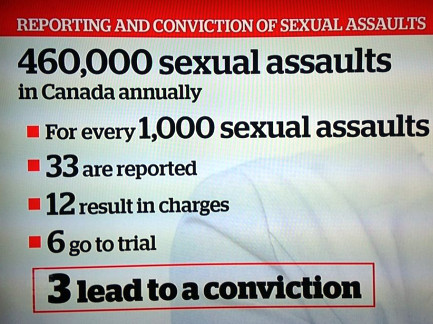