Joan MacIntosh is a teacher and writer living in St. John's, Newfoundland. She lived previously in Wolfville and Halifax, Nova Scotia, and returns to Nova Scotia every year. Her poetry has been published in journals and websites including TickleAce, Newfoundland Herald, and Leafpress, and she is currently working on a poetry blog. "He Sees the Wonder" is based on living and working in rural Atlantic Canada. 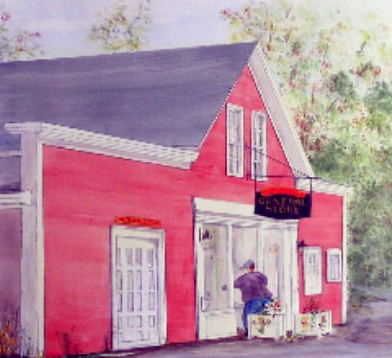 Along the edge of the harbor a brown road wiggled its way past clusters of clapboard houses wedged between rocks. Ruth Woodford washed dishes while watching her son, Allan, pitch rocks off the wharf. His face, at sixteen, was gaunt. Dry skin tightly drawn over hollow cheekbones and pale ears like two oversized petals of a buttercup. He was a very unusual-looking boy except when he smiled, as he did when the stones met the water. Then his face glowed as he clapped his hands fervently together, as if applauding life.

As the early morning clouds lay bare a promising blue sky, Ruth felt a subtle sense of dread. Attitudes towards Allan had changed since the days when he was a friendly little boy with a cheery greeting for everyone. Allan continued to be sociable but he was now tall, loud, and headstrong.

“Blue binders, Ma, that’s what I needs,” he insisted in a shrill voice in the stationary aisle at Riffs, bubbles of spit popping on his lips.

“You needs to get blue ones, Missus!” Allan blared to the girl at the check-out. The manager adjusted his paunch like he was lifting a baby and warned “Settle down now, Allan b’y.”

His cousin flushed with embarrassment when Allan came near with fluttering hands and saliva-sprayed questions. “How come you’re not friends with Pauline no more?” he sputtered, towering over the tight-jeaned teenager. His cousin flushed and turned away, stiff spears of bleached hair fanning her shoulders.

Most of all, Mr. Churchill, Allan’s teacher in the special class at the all-grade school, worried Ruth with his complaints. “Allan is mixing with the wrong sort, Mrs. Woodford,” Mr. Churchill grumbled in the aisle of Save Easy. “Especially certain girls. He needs a firm hand. I don’t like to think of where his stubbornness might lead,” he ended, shifting his shopping cart, grim voice trailing off down the aisle of cleaners and toilet paper.

As the creaking of Mr. Churchill’s shopping cart faded, the shelves of Spic and Span and Javex suddenly felt closed in. Ruth often found Allan chasing the long-haired White girls when she pulled into the school yard. Over tea at the church hall, Ruth heard Agnes Budgell exclaiming hotly about how the girls wandered the road at night in ragged clothes. “There’s dogs that got better lives than those chil’ren,” she hissed, gulping her tea.

Yesterday a crumpled note from Mr. Churchill tumbled from Allan’s book bag. Could they meet tomorrow? the angular script requested. What could it be now, she worried, thrusting the note out of sight in her hand bag. Ruth already knew Allan was talking back to Mr. Churchill just as he did with his parents with demands to go to dances and the pool hall. He wanted to be like the other teen-agers. Ruth understood that Allan could be trying. After all, didn’t she know him best?

Ruth was forty five, her three daughters grown, when she found out she was expecting again. Allan was born skinny and blue, his face like an old man’s, underweight, and dehydrated, heart fluttering in a tiny translucent chest. They rushed him to the children’s hospital in St. John’s where he was placed in an incubator with tubes, tapes, and lights, eyelids barely flickering. The next day, a balding doctor in a limp white coat drifted beside Ruth asking, “Is there anyone else in the family who is retarded?”

When he was strong enough Ruth took Allan home from the hospital to Bernard’s Harbor. Allan spent most days limply sprawled in a little chair, head lolling, pale eyes bleary. When Ruth fed him his bottle, he brought it up, face purple. She held him, tiny chest thumping. Later, she collapsed by his crib, too worn-out to feel anything.
She accepted her life as one long watch over Allan, to make sure he lived.

It was in the spring that Allan began to look at her. Weak sunlight beamed through the kitchen window panes and when she turned around to face him, he gazed back. There was something in his eyes that surprised Ruth. Bald head tilted, blue eyes steady, he stared at her thoughtfully. In the weeks that followed, he rolled out of his chair and lifted his neck. Panting, he inched forward, grasping the table leg with a triumphant grunt.

As childhood rolled into adolescence, Allan lived life with a kind of stubborn ferocity. He learned to pull on his clothing, button his shirt, shave the coarsening hair on his cheeks, write a note, sign his name. He took the little that he had and lit it into a blaze.

“We’ve got a problem, Mrs. Woodford,” Mr. Churchill began, straddling a chair and planting two brawny hands on the chair back. “Allan’s givin’ money to the White girls.” He paused for a moment, tapping thick fingers. “I think he’s paying them for something,” he blurted, face flushing. “It’s got to stop. I told him but he won’t listen. I’d like to bring him in now so you can speak to him.”

Ruth stared at him hard, blood rushing to her head. “What do you mean, paying the girls for something?” she cried.

The teacher blinked at her, startled. “Well, the girls have been known to do certain things for money, Mrs. Woodford and, Allan, well, he’s easily led!”

“Allan would never pay girls for certain things, Mr. Churchill!” Ruth’s voice broke as she rose, trembling, from her chair to face him. “Certainly he makes a nuisance of himself and likes to get his way. But we’ve raised him to have respect! If he’s givin’ his money away, there must be a reason for it. But you don’t think about that, sir. You just think the worst!”

Mr. Churchill’s jaw slackened and eyes bulged, “Is that what you think? I’ve done everything I can to set that boy on the right road. He’s got a burden to bear and I’ve tried to teach him. But suit yourself, if you don’t care!” he declared and marched away.

Ruth stared after him like a storm had ripped through the room and flattened it. How could Mr. Churchill accuse her of not caring? And Allan, was he involved in something shameful? Face ablaze, she hastened down the hallway and into the sunshine. Spotting Allan in a ring of children she waved him over urgently.

He blinked at her, alarmed. Eyes wide, he rolled a muddy tennis ball between his palms. “Allan!” she blared, thrusting her face towards him, “What have you done with your money?”

He swallowed, pupils dilating, face pale, tongue and throat working to form the words. “I gives it to ‘em”, he gulped, ‘cause they got holes in their socks.” He swallowed again, tongue rolling in the back of his mouth. “Big, big ones,” he added, eyes bulging. “And Ma,” he emphasized, “inside the holes, their feets is black. That’s why I gives ‘em money.”

He blinked at her, panting, and wiped his mouth with his sleeve. The tennis ball slipped from his fingers and dribbled onto the pavement. He chased the rolling ball as it plunged into the ditch, disappearing into a patch of swaying cattails. Ruth, worn-out, watched the stems sway hypnotically.

“He’s more than he appears,” a voice in her mind offered calmly. “He has always been a surprise.”

The lunch bell pealed and children sprinted towards the doors. Allan struggled up the bank of the ditch, pant legs muddied, holding the tennis ball like a grimy trophy, triangular smile triumphant. Ruth watched Allan beam at the world as the school bell resonated into the dusty afternoon air. He sees something we don’t see, she observed, children streaming around her. He sees the wonder.