Kristin Procter grew up in Ontario, where she partnered with a Brit, and then birthed two babies in Australia. She currently lives in Massachusetts, where she collaborates on workshops and open mics for motherwriters. Her writing has been published in literary journals and collections. Reach her at: kmprocte@gmail.com

I am a competitive person. In school, I succeeded not for the sense of mastery, but to get a higher grade. When I joined sports it was for team camradery, but mostly to win. Developing internal motivation is an ongoing struggle. I live my life out loud, listening for the echo. When I became a mother, I imagined my children as little echoes of me. My first, a boy, talked circles around me. Then, almost three years later, I birthed a daughter who I assumed would join our rowdy chorus. She found her place in our family, though perhaps not as I had anticipated.

Three years passed. Addi’s brother started kindergarten. She asked when she, too, could attend school and my stomach clenched. It was the feeling of your baby reaching for the stars before you are ready for her to fly. It was the feeling of being on a visa that doesn’t allow you to work, and wondering what you would do with the time. What really rattled me, though, was something I had not yet found words to express. Instead, the cells of my body, this body that once held her body, thrummed.

Something was different about Addi.

Our family is geek chic. We appreciate that people are unique, quirky even. Addi’s brother adores freshwater fishing and crochet, hobbies he picked up at five years old. Addi’s dad is a semi-conductor researcher who drives a Volkswagen Beetle. I celebrate Pi day and wear lopsided hand-knit hats. In many ways, Addi is the most “normal” one. She races her trike through puddles, collects caterpillars, screams, climbs, and twirls, like adventure ignited. She also struggles with anxiety. There are times she becomes so overwhelmed by the intensity of the world that she implodes, crumbles, inconsolable, to the earth.

In these moments, I struggle to connect, to walk into her fire. All I want to do is scream, settle down – it is no big deal – but the more I talk, the further she contracts.

When her requests for school became persistent, I signed her up for a preschool screening. She spoke excitedly on the walk to school, counting buses in a row. Then, when we entered the testing room, she closed her mouth and didn’t say another word. Not her name. Not her age. Not her ABCs. Not her colours, all of which she knew. As we left the testing room, I joked I had a little mute girl, tossing the term casually around.

How long are you going to stay quiet? I joked.

She didn’t respond until we re-crossed the threshold of the testing room door.

About five minutes, she replied.

Once school started, life caved in on Addi. Every day was a struggle. At home, she would get up, determined to go to school. On the drive to school, her volume would drop, but would pick up again along the sidewalk, counting buses. When it came time to hug good-bye, she held on, tears forming, but she would always walk into class. I assumed like most kids, once inside, she would be fine. Except she wasn’t. Terror held Addi’s limbs and breath. She didn’t speak. She didn’t eat. She barely moved from one square of carpet, silent heaving sobs her only interaction – and no one told me for weeks.

I try to forgive myself for the missed clues and the mistakes, though it is tempting to search for what I did to “cause” my child to be different. Was it the time I left her overnight with her grandparents whom she had just met? Or when we moved her critically developing ears from her familiar Australian accent, to Boston’s strangely absent Rs? Questions multiply, but there are never really answers – just the sound of doubt and guilt.

Recently, Addi and I watched her baby videos. In one video, Addi gurgled and babbled as her chubby thighs cycled the air. In the video, I moved closer until, surprised, baby Addi spotted me. Her mouth closed. Her squeals stopped. Silence. Sitting on the couch with four-year-old Addi and watching baby Addi stop speaking, shock shifted my bones. Did it really start this far back?

Sometimes, I imagine myself fully absolved. Solution found. Genetics. Not my fault, at least not in a way I can easily change. I relax. But in the morning, when Addi screams unintelligibly over what seems to be a misunderstanding about which fruit she wanted or which cup is hers, it doesn’t really matter how we got to this breakfast table. All that matters is that we are here. Here, in a space where Addi sometimes talks, where panic throttles her from the inside without warning, and where I struggle to close my mouth and listen.

So, what is it like to be four years old living with selective mutism? If you asked Addi, she likely wouldn’t answer. Direct questions are hard. New people are hard. Any perceived judgement is excruciating. Even when I ask her, she is likely to say, I am not a sometimes talker.

When pressed to recall that day at school, or two minutes earlier at the shops, she purses her lips and walks away. It isn’t easy to get an answer from Addi.

But sometimes, when Addi feels strong and I feel brave, we find ourselves in this space where she talks and I listen. It is a beautiful liquid place, quiet. Here, she explains her turmoil: I don’t know why all the other kids can do it but I can’t. I try my hardest, and I still can’t.

She tells me panic is a dizzy chest, a wobbly belly and jelly knees. She presses my hand into her sternum, to experience the pounding rhythm of her terrified heart. My own heart shutters, but I stay with her. We float. 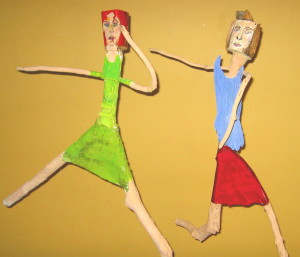 What is it like mothering a child with selective mutism? I only know what it is like to mother Addi. It is both the hardest thing I have done and my biggest accomplishment. I was reminded of this recently when Addi enrolled in art class. I provided information about selective mutism to the instructor, and at the first class I reminded the teacher that Addi is a sometimes-talker. Addi smiled, relieved her teacher knew.

Then one day her regular teacher was absent. I peeled her screaming body from the corner of the art room, embarrassed and disappointed, but not surprised. I pulled her into my arms and perched on a stool. We breathed. Addi grabbed a crayon and started drawing. I moved her to her own stool. She continued to draw. I left to check on her brother. She drew. From the waiting room I heard the class preparing to play a game. The teacher encouraged the kids to call out which animal she was drawing. I cringed. Then, the child, who half an hour earlier was a heap of flesh on the floor – my Addi – yelled, Bunny! Then, she took her place at the front of the room. It was her turn to draw.

Other parents collected their children and commented on the beautiful colours and complexities of the elephants they had drawn. I had tears in my eyes as I hugged Addi and told her how proud I was. She said, I don’t know why. I did perfectly well at art class right from the start.

I couldn’t argue. In her way, she did.

Addi has her own way of living out loud. It is quieter at times, but no less vibrant. I recently read that stars are born when clouds of dust and gas collapse into themselves, and I see that in Addi. Her strength is not trying to beat anxiety. Addi’s strength lies in the way she inhabits anxiety, the way she folds into herself, and emerges illuminated. Now, I try not to waste time waiting for her sonic boom; instead I find a quiet corner of her universe where I wish upon her star.