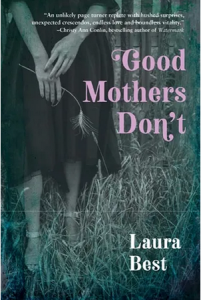 Even in lives riddled with tragedy, there are always moments, if scattered, that give hope for the future. Nova Scotia author (and Understorey Magazine contributor) Laura Best builds on this duality in every aspect of her latest novel, Good Mothers Don’t (Nimbus Publishing, 2020). Best details the after-effects of electroshock therapy and other ‘treatments’ for mental illness in the mid-1900s, only to then contrast them with warm themes of motherhood, family, and home. She portrays her characters in their many shades of gray, never sacrificing their realism to earn the affections of her readers. Among Best’s characters, none are completely evil and none are completely innocent; there are only broken people, and those who are a little more broken than others.

Good Mothers Don’t begins with a prologue set in 1975. Through first-person perspective, we are introduced to a middle-aged Elizabeth Mackay as she is being administered to Harmony House, a group home with the same name of a real-life group home that operated in Nova Scotia until 2014. Elizabeth alludes to dealing with mental illness for many years prior, as well as her fractured memory, both of which later become main interests of the plot.

The novel is divided into two parts—the first taking place in 1960 and the second in 1975. Recounted in a mosaic of events rather than a linear plot, the first half of the story sets the stage for the second half by introducing the main characters. Among these characters are Elizabeth’s son and daughter, her sister-in-law, and her husband. However, it is only the female characters that make up the alternating first-person perspectives in this part of the book. In Elizabeth’s chapters, her mania is denoted through long tangents and raging thoughts inside her head. This form of unreliable narration creates intimacy as it becomes up to the reader to decide what’s true and what isn’t, especially during the scenes when Elizabeth roams about the farm at night due to her chronic insomnia, and her paranoia begins to get the better of her.

Best further explores this abstract reality later in the novel as Elizabeth searches for her lost memories. This is partially the reason why the alternating points of view (particularly between Elizabeth and her young daughter Jewel) become so very important: they re-explain details of an event that may have been lost in the first rendition, providing the reader with a fuller picture. In this sense, the story only truly begins with the second part of the novel. This isn’t to say that one part is overwhelmingly more enjoyable than the other; both are so different in terms of progression and themes that they’re difficult to compare.

The second part of the novel introduces us to the same Elizabeth we met in the prologue, fifteen years after the events of the first part. Best is able to make this transition seamlessly, having given Elizabeth a timeless voice that translates well through every time-jump and flashback. If the main goal of the first part was to establish both the characters’ backstories and situations, the main goal of the second part is to resolve—and Best does so wonderfully. The second part has more of a focus on Elizabeth as she searches for her family despite her insecurities about whether she is fit to be a mother at all—whether she deserves to find them. Throughout this journey, the remaining characters are offered their own conclusions, well integrated throughout Elizabeth’s narrative. By the end of the novel, Best has managed to conclude all of the subplots. The result is a hopeful and satisfying ending, singing the importance of family and a future, bright if not yet decided.

One thought on “Good Mothers Don’t”