Their footsteps had disturbed the morning dew and left a long trail of dark green in the grass. I breathed in, exhaled slowly, and trudged up the hill following one of the wet paths. My inner voice echoed with every step. It was the sound of my mother: keep your head up, your back straight, careful of your words.

Years ago, unsuitable soil was dumped here during road construction and pipe excavations. This rolling hill was left wedged at a fork in the road between two streets, both named Beverly. Later, a few random trees were added, an afterthought, no doubt.

It was an unused parcel of land but that day the project team had gathered to kick off the “first of its kind” green infrastructure facility in our city. The team stood in two separate groups at the top of the hill: the field workers and the office folk. The groups had not yet met face-to-face, though introductions had been arranged through emails and phone calls. I was the lone female engineering designer on the team. For this project, I was also stepping into the role of construction inspector.

Stopping halfway up the hill, I took another deep breath. One of the land surveyors had laid out the project on the ground with white spray paint. I hopped over a white line, then another, to the group of my familiars: the office folk. We were the project administrators, designers, planners, and engineers. I nodded, offering friendly hellos. We made small talk about the weather and family. We listened politely to each other’s news. I answered questions from the engineer about the facility and we discussed its construction.

In the other group were the field workers: the land surveyors, machine operators, inspectors, and labourers. They didn’t seem to use birth-given names to talk amongst each other. New monikers had been appointed over time, likely through a slapstick event, shortening of a last name, or as a token of their skill. Their plaid jackets hung loosely over worn-out, orange t-shirts branded with big reflective Xs. Overstretched jeans partly covered their moulded, unlaced boots that were caked with old mud and splatters of oil.

At some point, Keith, the machine operator, broke off from the circle of field workers. He walked over and tapped my shoulder with the back of his meaty hand. A few guys from the field glanced my way.

“We have a few questions, too.” Keith said and he walked up the hill. I quickly followed at a pace that was double time to his natural stride.

“Well, over there, runoff from the road will flow off the pavement through the grass,” I said, catching my breath. “Then it will flow through a strip of rocks over there. Water that flows through the rocks will filter down through the engineered soil, about here.” I waved my hand over the land, stopping at the areas of importance and making circles in the air. I looked up to his face for clues that he understood. A full set of rolled design plans were tucked neatly in the pit of my arm. I held the heavy tube of paper tightly against my coat. Its length balanced my small frame.

“No, it’s not a garden, really. It’s an engineered bioretention facility. There will be pipes underneath.” I squished the grass with my shoes as I began to unroll the plans, firmly planting my heels in the ground. “It’s designed to filter…”

Keith walked away as I was showing him the design and casually joined back into his circle. My eyes squinted after him as if there were a glare from the lights of an oncoming car. I waited, watching to see if he would return. I was left frozen in no man’s land for what felt like several minutes. Winding up the plans, tighter than before, I snapped the elastics forcefully at each end to secure the roll. I walked back to my group with my blood simmering, replaying the scene over again in my head. 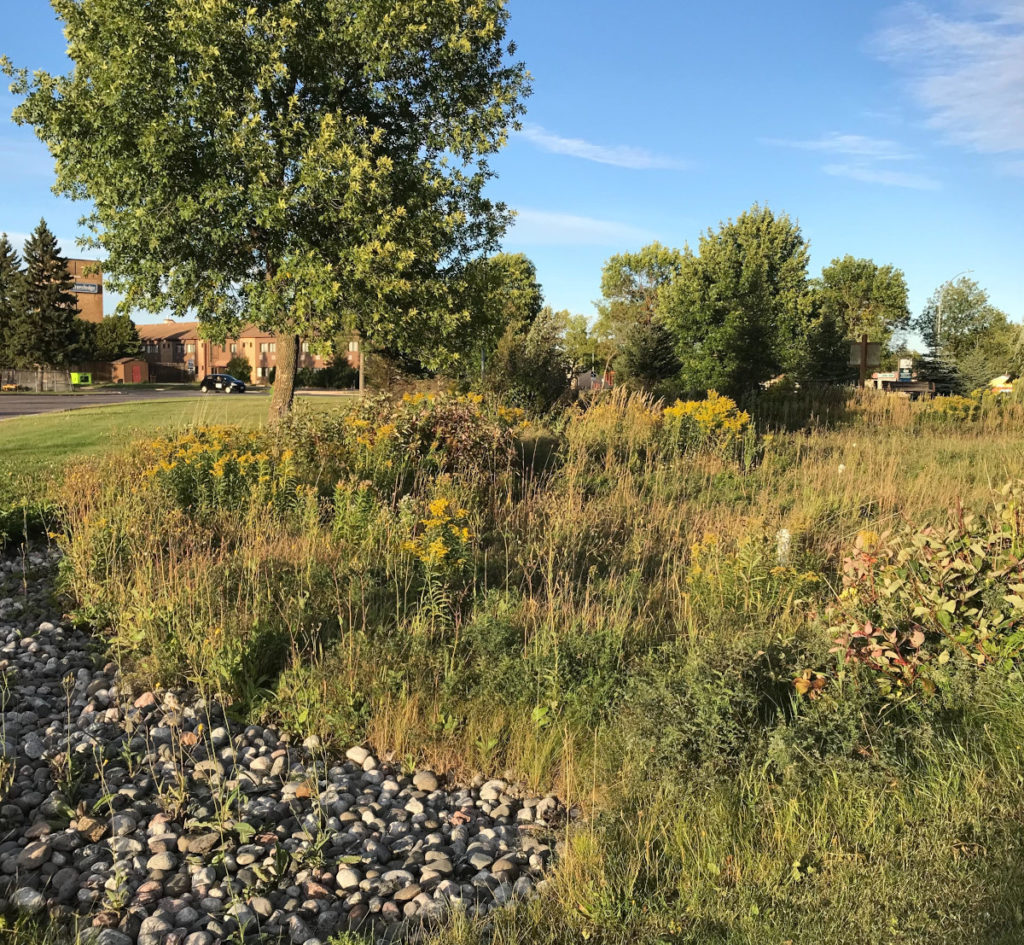 Conversations began to fade and the two circles dispersed. The office folk walked away, one by one, to their cars and waved good-bye. The field workers continued to linger on the street. One guy talked to another in a truck. A few workers gathered outside the excavator, and one had his foot raised, resting on its tracks. Some were leaning on shovels, while others organized tools. I walked alone down the hill towards my car. When I stepped off the grass onto the pavement, I was signalled by a raised arm and a backwards wave.

“How are these garden pipes gonna connect to this catch basin, here?” Keith shouted. He was standing on the street beside the surveyor and pointing at the metal grate in the road. Beaming, I made short quick strides in their direction.

“Under the layer of engineered soil, there will be a series of subdrains. Each length will connect to a monitoring well,” I said, glancing toward the hill. “Any water in the subdrains will flow towards the outlet pipe.” I paused and tapped my toe a few times on the grate. “And the outlet pipe will connect to this catch basin with a sixteen-inch pipe.”

“We’re gonna be taking out a lot of dirt then, eh?” Keith said. “Any idea how much?” Without waiting for an answer, both men turned and walked up the hill. In the distance, I heard the surveyor answer: “I’m guessing several truck loads.”

The guys started to dig before dawn on a Monday morning. I drove by their dump truck, already full of dirt, on my way to the site. My mind raced. I kicked off my shoes and stomped into heavy boots. I shrugged on an oversized plastic safety vest and fastened the Velcro straps around my waist. My hard hat perched loosely, a bright orange dome tightened to the last notch. I stuffed my calculator into my back pocket. With my arms full of equipment, I leaned forward up the hill. I forced the legs of the tripod into position in the ground, bouncing heavily on each leg. I plunked the “one-man operated” automatic digital laser level on top of the tripod. Marking the measuring rod with penciled lines, I checked the level against the benchmark and headed to the work area. I stood on the edge of the excavation.

“You should’ve been set up before we arrived!” Keith yelled, stopping the excavator. “If I was a contractor, you would’ve lost your job already!” All eyes fixed in my direction. My stomach turned. I hopped down into the trench. In a hurry, I flattened a spot in the dirt with my foot. My lips pursed in a thin line and I felt my cheeks flare red hot. Placing the rod on its end, I raised the metal sections of the ruler until the automatic level beeped.

“Keep digging, Keith,” I announced. The bottom elevation of this trench had to be precise for the facility to work.

“I don’t think so,” he said, staring intensely.

“You need to dig more, about twelve inches or so.” I matched his stare.

“Nope. Check again, did you set up the laser level right?”

But I immediately began to second guess myself. I reexamined the pencil marks on the rod, then grabbed the calculator from my back pocket. I punched in the numbers again to double check.

“307 millimetres. That’s roughly twelve inches. You gotta dig another foot,” I said. The area between my eyebrows tightened.

“Check the plans!” he yelled. “You want one of the guys to do the measuring?”

“I designed the facility, Keith. I know what the plans say!”

Keith shook his head and shut the door of the excavator. The machine roared back to life. The teeth of the bucket combed the earth, quickly and methodically, making a small pile. The bucket scooped the pile, curling under, and swung the sandy clay loam into the back of the dump truck. The other guys grabbed shovels and rakes to level and smooth out the hole. I checked again and signalled with a horizontal wave then a thumbs-up when just the right level was reached.

The work stopped at midday for lunch. The sun glared against the back of my sunburned neck as I dismantled the laser level from the tripod. I placed it neatly in its plastic briefcase before gulping down some water. I descended from the hill and sat in the grass under a tree near my car. Keith’s truck rolled up and stopped before me at the edge of Beverly Street.

“We’re goin’ for lunch,” he said, nodding in the direction of the guys sitting in the back. His arm hugged the outside of the truck door. “Come on, let’s go!”

“Ok,” I said, rising up and letting the warm air fill my lungs.

“You need a nickname,” he said, grinning. “What should it be guys?”

I walked over and joined their group.