Grace cut through the Common as she walked to her appointment at Crowning Glory. A monarch butterfly crossed her path. Grace paused, surprised. It flew left, right, then dipped low near a bed of mature coneflowers. The insect’s large orange and black wings opened and closed in the afternoon sun. It floated high behind an oak tree and disappeared. Grace stared after the insect feeling hopeful. Monarchs were still here. Perhaps it was migrating south. She couldn’t remember seeing one since she was a kid. She was forty-five now. “Half way to ninety,” a niece had gleefully shouted at Grace’s birthday.

Outside the Common, Grace crossed several lanes of traffic, the hot asphalt and metallic thrumming of engines a counterpoint to the peace of the garden. Entering the salon a few blocks later, she found Patti humming to gospel playing in the background. “Have a seat, my dear,” Patti waved her in. “What are we doing today?”

Grace greeted Patti, sat in the hairdresser’s chair and examined herself in the mirror. Gray and silver and white had taken over her once black hair. She had resisted pressure to dye it in her thirties. The grayer it got, the harder it became to style. Wiry grays refused to curl tightly with the rest. Grace held up her phone with a photo of the hairstyle she wanted. “You want the big chop?” Patti raised her eyebrows. “You sure?”

Grace had been here once before. A different chair, another mirror. At twenty, she cut off the chemically straightened hair she’d cultivated since her early teens, though no one called it a big chop back then. In high school, she had wanted long smooth hair, to help her fit in, a black girl in her mostly white suburb and school.

In university, she’d embraced her blackness, despite not always knowing what that meant. Her father was Ghanaian, born in Accra, her mother Black Nova Scotian, from Dartmouth. Growing up, she’d been teased for being African. She was African and Scotian, not always enough, or too much, of both. Cutting her hair short the first time had been exciting. An experiment. She wanted to find herself, try new things. She loved the soft spring of her tight curls, the round shape of her head. “Now you really look African,” exclaimed her roommate Meg, after that first cut. She and Meg, who was adopted, had spent time discussing their backgrounds, though Meg tended to make a joke of everything. Grace rolled her eyes. “What? You do,” Meg insisted. “It’s cool,” Grace said. African. She took it as a compliment.

Grace had kept her hair short for over a year, wearing hoops and lipstick so she wouldn’t be mistaken for a boy. Then she grew it long and kept it in its natural state, her hair evolving alongside her education and career. After two degrees—Psychology and Human Resources—she’d moved through several jobs in staffing and training, eventually finding herself managing labour relations in university admin. It wasn’t the academic teaching career her parents had envisioned for her, but she earned a good living.

At work, she styled her hair in sleek buns and updos, occasionally wearing a blow-out straight style and receiving compliments for looking “professional.” After mentioning her impending cut at work last week, her co-worker Marcia said, “You’ll pull it off. I’m not ready to give up yet. Maybe when I’m seventy.” Grace didn’t think she was giving up. Would she look chic, as another friend suggested, or just old? Was short hair giving up on femininity? She wanted to feel attractive and natural, for herself rather than her boyfriend or friends.

Grace looked up at Patti, who was waiting for a reply. “I’m sure,” Grace said. Patti was older than Grace, but looked younger, her long black braids wound high on her head, her dark brown skin still smooth. Glancing in the mirror again, Grace thought she glimpsed her ninety-one-year-old grandmother winking back at her, a long white braid resting on her shoulder. Graced blinked away the image, feeling foolish.

No, Grace reassured Patti, she hadn’t broken up with Shawn. Or quit her job. No one close to her had died. “I have to ask,” Patti said. “People come in here after some dramatic event, get their hair cut off or dyed blond.” Patti lowered her voice. “Then they’re back here crying, saying what have I done?”

“Not me, I promise.” Grace laughed, but she had thought about it for months. Carry on or let go? Her hair represented years of effort and identity, history. She was ready to leave behind the products, the prep time, her look.

There was a flash of metal in the mirror as Patti poised her scissors above Grace’s head. The radio had shifted from Yolanda Adams to old school R ‘n B. Aaliyah, Luther, TLC. Grace relaxed, sat a little straighter in the chair. “Ok,” she signaled to Patti. As Patti began to cut large sections of her hair, Grace came back to wondering about herself. Why should her hair be so much of her self? What was identity anyway? Life’s losses and accumulations, she supposed. Small shifts in awareness. 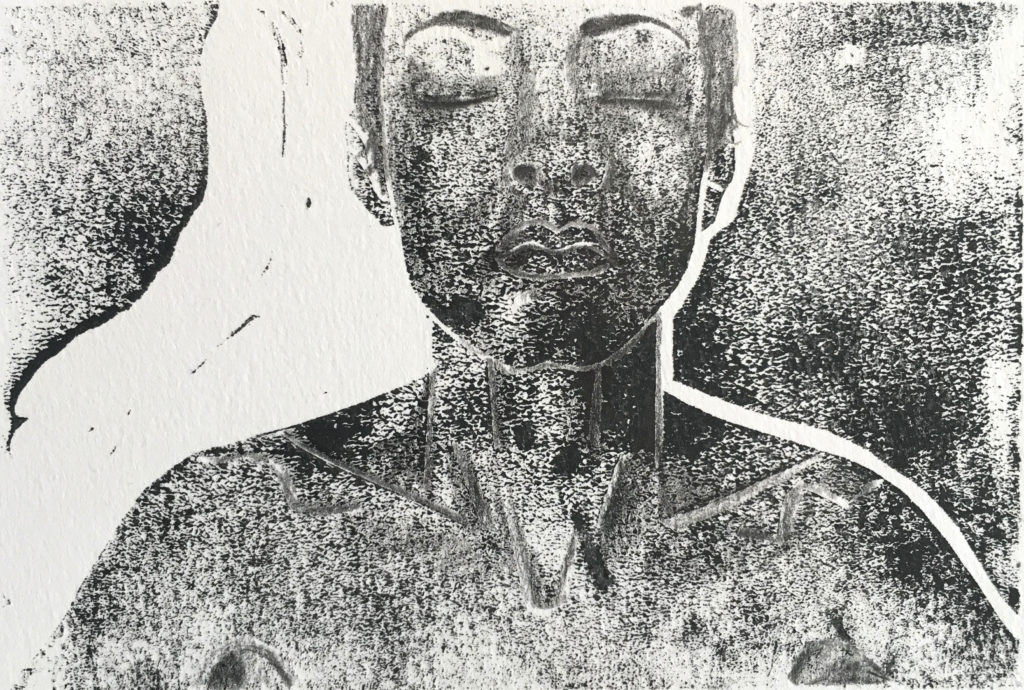 Been Caught Dreaming (1990) by Chrystal Clements

Grace hadn’t married. Despite some early troubles and times apart, Grace and Shawn had always gone back to each other. When they were younger, she’d worried he’d leave her. In their thirties, he wanted children, she was unsure. She had started a new job and was afraid to take time away as her career was solidifying. Then, she thought they’d be tied together forever if they had a child. She waited too long. Privately, they spent time and money on fertility treatments. The agony of waiting, the expectations and failures, exhausted them. When she turned forty, she’d had enough, and they stopped trying. She was relieved. Shawn was sad. Still, they remained committed to each other.

Shawn was a fun uncle to their nieces and nephews, who had rotated through their townhouse over the years. She’d viewed them all with slight detachment initially, even the two from her own brother. When she babysat them, their quirks made her laugh; she realized she loved them. She had wanted her own: a reflection of herself, a sum of her life with Shawn, she admitted that now. Her body had thwarted her tardy realizations. Or had it been the other way around?

“No regrets, right?” Patti questioned and ordered at once, as she continued to cut. “No regrets,” Grace echoed, while thinking of things she had in fact regretted—the too-corporate work, the years spent seeking approval from family and friends. Her indecision.

Grace knew it was time for a change one evening last month. The August full moon, bright orange at the horizon, was rising. Its neon glow drew her to the window. She had a premonition she wouldn’t sleep that night. Ruminating at midnight, Grace got out of bed, and made her way downstairs. She banged her knee as she sat at the kitchen table, awash in moonlight. A spot on her right kneecap, scarred from a car accident in her teens, was itchy and rough. Though the scars had long since receded, a single raised keloid remained. Feeling an opening, she scratched until a single shard of glass, the size of a grain of sand, emerged from the scar. Grace was impressed, all that time, her body held this minute fragment. She rubbed the shard in her fingers and felt it slip to the floor. She thought she would tell Shawn, but it was gone. She reclined in the kitchen chair and pulled at the long spirals of her hair. The silver coils shimmered in the white light. “It’s too much,” she decided. “I’ll cut it.” Tired finally, she returned to bed. She would make an appointment in the morning.

“A little shorter, please, Patti,” Grace said, focusing on the mirror again. Patti’s experienced fingers cut deftly, shorter and lower, until her hair was neat and close-cropped. Clumps of thick curls lay on the floor around them. Patti held a hand mirror up for Grace to examine the back. She could see her scalp through the soft gray fuzz, only a hint of curl remained at the crown of her head.

Grace rubbed her head, feeling exhilarated and a lightness. She paid Patti, thanked her and stepped out of the salon into the parking lot, pleased with herself. Across the street was a busy shopping centre, to the right the Macdonald Bridge streamed Saturday afternoon traffic. At left, on a vacant lot of scrub and loose concrete, crickets sang against the street noise. Or were they cicadas hidden in the dry grass and weeds? A chorus to the passage of time, which, if you weren’t careful, Grace thought, went by unacknowledged. A disappearing monarch, a lost shard. Hair sheared off and swept away.

One thought on “Big Chop”