I have a bomb in my purse. Its presence is constant. It could go off at any hour, as long as I’m in range of the detonator. Across the province, the country, the continent, there are hundreds of thousands of people carrying their own bombs, strapped to belts, tucked in pockets, clipped to sun visors in cars. And here’s the thing I’m not supposed to say out loud: I can’t wait until the bomb goes off.

Every Christmas when I was growing up, my sisters and I would wake in the cold, dark morning and gather together in one of our bedrooms to open the stockings that had been left on our beds. Then we would bundle ourselves in fleece housecoats and slippers and take our opened stockings into our parents’ room, unveil our gifts, and watch as Mom and Dad opened theirs—painstakingly it seemed, as we were anxious for bigger presents under the tree. One year, we had just gathered on my parents’ bed when my father’s bomb went off. He was up, dressed, and out the front door into the cold Christmas morning while my sisters and I looked at each other. The presents would have to wait. Someone was having a bad day.

My father joined the fire department in our village on the South Shore of Nova Scotia before I was born. As a young child, I grew accustomed to getting out of the way when he bolted from the house at the squeal of his pager, the tires on the car kicking up gravel in the driveway. When he got home, I would hug him and take in the smoky-diesel smell of his turnout gear. And when the fire trucks visited my school during fire prevention week, I clung to him, showing my firefighter Dad off to my friends.

In grade school, students learn about the “fire triangle,” that fire needs heat, fuel, and oxygen to burn. Take away one of those elements, according to the triangle, and the fire will go out: heat cools with water, fuel is finite, oxygen can be depleted. But I now know that the chemistry of fire is more complex. These three elements alone cannot create a fire. Something more is needed: a chemical chain reaction that allows the fire to build through ignition to the stage of flames and smoke. Heat, fuel, and oxygen can be present but they are futile—even innocent—without the chain reaction. It’s like attraction, the thread that ties lovers together, the roots that tie family together. You can trust someone and respect them, but without love, what kind of life can you build together? You can love someone and respect them, but without trust, would you go into a burning building together? This is a firefighter’s highest, or lowest, praise. I would—or would not—go into the flames with you. 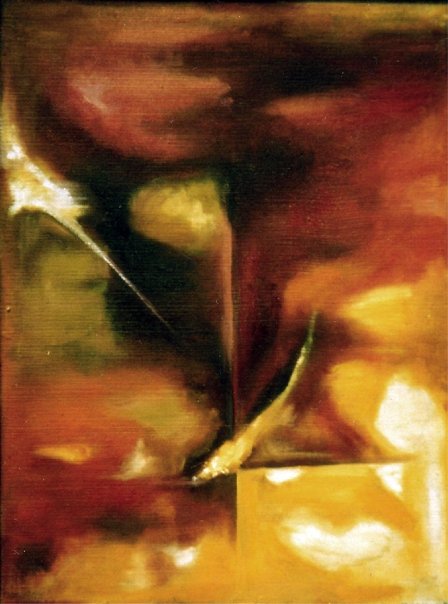 Adrift a Sea of Hidden Fire by Meena Chopra

I left Nova Scotia at eighteen. I jetted off to university in Toronto and then spent nearly a decade in Ghana and South Africa, where I worked as a journalist. These were wonderful, lonely years. I swung through work, friendships, and relationships, looking for something to make a happy life. I found I could create a spark but couldn’t sustain it. I blamed the long hours at a tiring job. In Ghana, I blamed the exhaustion that comes from living in a place where daily necessities like electricity and running water are often luxuries. I blamed the passive alienation, the persistent feeling that I didn’t fit in, that I would always be seeking a link in the chain reaction, no matter how long I lived away

I began to think, increasingly with the passing years, about moving back to Nova Scotia. It might have been a flight of fancy, a grass-is-always-greener dream, but after sixteen years away I wanted to believe that the place where my roots were the deepest would provide that missing link. So when I finally found a job I could do from anywhere—no office required—I was fuelled. I went home.

I spent a summer in my parents’ house, in the village where I grew up. As I watched my Dad go to weekly practices and meetings at the fire hall, watched him peel out of the driveway when the pager squealed, I began to ask him more about the fire department. I saw how it fulfilled an innate need to work together, to serve, and sacrifice. It was the opposite of that feeling of unbelonging I had during my lonely years abroad. Some people thrive as the outsider. I didn’t. In Ghana, the local term for foreigners—usually white people—is Obruni. It’s often friendly and harmless, an expression of curiosity but as the years went on it grated on me more and more. Every time I was called Obruni, I was reminded that I didn’t belong and never would. I realized that belonging was the link I was missing.

Nine months after moving back to Nova Scotia, I bought a house. Shortly after I moved in, I applied to join the local fire department. I was interviewed by two of the department’s officers, got a criminal record check by the RCMP, and was voted in at the department’s regular meeting. Within a month, I became a volunteer firefighter.

My resting state is now anticipation. When I stand in line at the grocery store, I wonder if people will think it’s rude if I drop my basket and run. In the drive-through, I look for escape routes and feel anxious if there isn’t one. If I leave my house without the pager-bomb, even to take out the garbage or hang clothes, I chide myself and go back to fetch it. Once, I fled from a meeting because I was so certain I heard my pager go off. I was halfway to the fire hall before I discovered I was wrong.

I am aware of the pain in my shoulders from practice, the blister on my foot, the mystery bruises that appear and later silently slide off my skin. Anxiety, aches, and nerves: these are the runoff from my service, the quiet badges I carry to belong.

A few weeks after joining the department, my first call came. I had dinner cooking. I remembered to shut off the stove but then took too much time to switch off the television and use the bathroom. I’d wondered how I’d react when my pager went off and found it brought a surge of adrenaline. And this, too, is part of the belonging. The rush. The sudden need to drop everything. I knew that all the firefighters were doing the same and that for the next hour or two or six we’d be joined together by a silver thread. We would rely on each other. The lights and sirens cut through the still evening as we prepared for the work ahead. The call was to a car accident. We were there to control the flow of traffic and help clean up debris, not the glamorous work of storming a burning building but vital to aid someone’s bad day.

In our department, we have office workers and mechanics. We work in health care and retail. Some of us are retired. We write and ride motorcycles and go south on winter holidays. We all carry the pager-bombs and we all have families who are left, like my sisters and I were left that Christmas morning.

When I was an outsider, an Obruni, I belonged to universities and jobs and professions—the necessary, easy belonging of adulthood. But I found little satisfaction there. Jobs change, classes end. Now, as I tug on my heavy yellow gear and try not to trip over my own feet, I realize it is the excitement and camaraderie of service, of answering the pager-bomb, that has made this rural Nova Scotia village more of a home than any other place I’ve lived. I have always had oxygen, fuel, and heat. But we just sustain the elements. In fire service—in fighting fire—I’ve finally found the chemical chain reaction to keep my own fire burning.

3 thoughts on “Chemistry of Fire”