Second Half. The Cunts are down two-nothing against their rivals, the I’m Not Letting You Merges. Number twelve, center-forward, has the ball wedged beneath her fancy Nike cleat, laces grey and unwieldy as her pubic hair. The ref is a teenaged boy, pudding-faced and porn-addicted with a whistle-leash draped around his neck. He hates reffing the over forty, division-three women’s league. The players scare him. They are emotional and in constant pain. Braces are scaffolded to their legs, and tensor bandages cut off their circulation, cut off their feelings. They run on gluten and wine and animals they can’t stop eating. And then there are the players that flirt: number three on the blue team, number sixteen on the white. Ref scans to make sure they’re on the field. To make sure they’re not on the field. He adjusts himself.

“Keeper ready?” Ref asks, eyeing the goalie guarding the net on the west end of the field. She is familiar to him. She is every woman in an ad for life insurance, except with a youthful high ponytail and thick white socks. The keeper waves, or gives the finger. Ref can’t discern which.

He turns to view the opposite end of the field and repeats the question. Keeper is not ready. Keeper will make everyone wait while she takes a parting sip of vodka-water from her stainless steel Marshalls-purchased bottle with BORN READY written in gold meme script across the rim. Her power is making people wait: contractors, customers, her husband when he comes home for dinner with fish and chips and someone else’s titties wafting from his moustache. Keeper sets down her bottle. “I’m always ready,” she shouts. Ref blows his whistle. 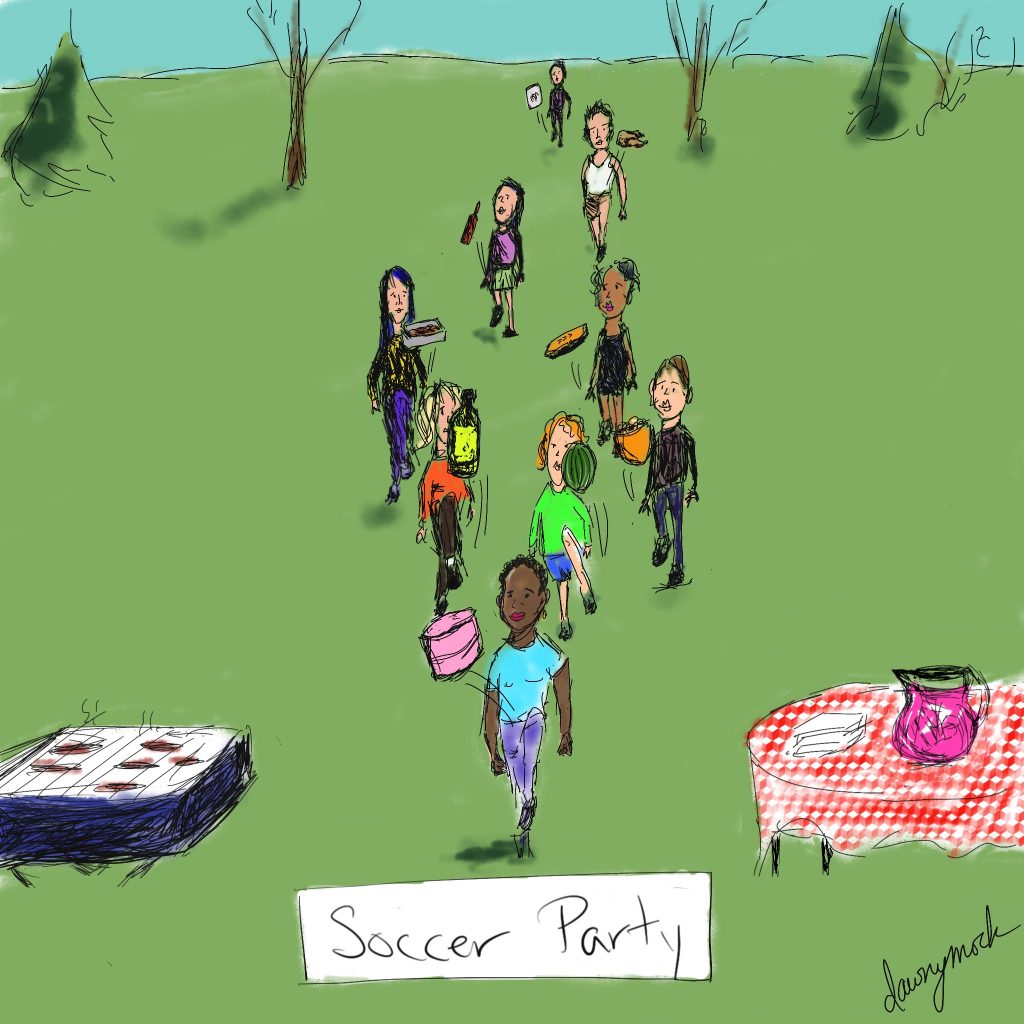 Twelve passes back to Three. Three is distracted. She is contemplating whether she could ever go down on a woman. Specifically Barb, from accounting, possibly even Fourteen on the Cunts. Why would Twelve pass back? It’s indoor soccer. The field is short. Three chases the ball, tries to get a touch. She only knows a few lesbians, and certainly none well enough to ask what it’s like to get it on with a woman. Maybe if she got high first. A blue jersey is in front of her. Fifteen from the other team. Where the hell did she come from? Twelve yells, “Man on!” Man on? Three thinks. Man already gone. It’s why she’s thinking about Barb’s spreadsheet. Three wants to yell at Twelve, ask her what she was thinking passing the ball back. Instead, she complains to Four.

“Offside!” Four wheezes. There’s no offside in Indoors, everyone thinks, everyone knows, but Four insists. Four believes. She storms down the field, a petulant child with fallen arches and roots that need touching up. Someone will pay for Fifteen’s offsidedness. Her credit rating, her cholesterol. Her husband, the next time he tries to cop a feel when she’s watching Dead to Me on Netflix. She’ll slap his fucking hand. Tell him to change the friggin’ light bulb in the closet so he’ll stop asking her if the pants he’s chosen to wear are navy blue or black.

“Play on,” the ref calls. Fifteen hasn’t stopped playing. She always has the ball because she’s faster than everyone else. Younger too. She likes to surprise her opponents. Sneak up on them like a credit card balance, like age. She likes to remind them that they are closer to death than they think. Closer to death than they’ve already come to accept. That they graduated from high school forty years ago, and that there’s no time left for them to write a memoir unless it’s a cancer one because nothing interesting has happened in their life.

Ten races toward Fifteen. Fifteen is getting cocky and loses the ball. Good riddance, Ten thinks. You should’ve passed it when you could. You should’ve had children when you could. Ten feels good that she has the ball. She feels good that she has four kids. She feels good that right now she doesn’t want to knife anyone. She smiles. A teammate cheers her on because she’s dethroned the infallible Fifteen who just sits home all day. In her effort, Ten loses her balance. She steps on the ball, a wonky circus bear, and falls flat on her back.

“She stepped on the ball,” Fifteen retaliates, pacing against the boards.

Thirty steps onto the field, a middleweight Jesus with mahogany hair. No make-up. She’s in the medical profession. No one really knows what that means. Physiotherapist? X-ray tech? Hospital clerk?

Ref can see his reflection in the glass boards surrounding the playing field. He fixes his hair. He wants to check his phone to see if Adelaide snapped him back. He wonders if she’s the kind of girl who sends nudes.

Thirty hovers over Ten. “Breathe,” she commands. Then she waves a trio of fingers in front of Ten’s face. “How many fingers am I holding up?” She says it loud enough for her husband, who is watching in the stands, to hear. He will praise her later because she is important and very valuable.

“Did you check her pupils?” Twenty wants to know. She’s heard others ask this in similar situations.

Thirty pulls out her glasses for effect, says that Ten’s pupils are good, and then turns back to her patient. “Any nausea?” she asks. All the players reply yes.

Miraculously, Ten is okay, and she gets to her feet by herself. Nothing too serious. Just that same hamstring she tore in Gettysburg. She is replaced by Five.

Newly-arrived Five squares up with childless-by-choice Fifteen. Ref leans away expecting to be breathed on, or whacked by an inadvertent fist, a rogue knee. A sexual assault. He drops the ball between the players.

Five and Fifteen miss the ball and punt each other. Four sees this as her chance. She barrels forward and takes both players out, including her teammate. Having been bitten by an unsuspecting midfielder on the I’m Not Letting You Merges, the Ref doesn’t see who’s at fault, and therefore doesn’t blow the whistle. Instead, he cradles his cheek.

Four kicks the ball too far ahead of her. Always, thinks Seventeen, always too far. Four tries hard to recover the ball but gases out and has a heart attack on the field. At least I’ve landed on the ball, she thinks in her dying moment. They’ll have to move my cold dead body to get it now.

The players move Four’s hot dead body to the bench, noting the smudge of moustache on her upper lip. She smells like garlic, but no one lets on.

Back on the field, a fistfight is underway. Keeper-with-juvenile-ponytail and Seventeen have suggested the Ref just call the game, given Four’s death and all, but Fifteen and Three still want to play. Both argue they might die if the game doesn’t continue.

“Everything’s a game to you,” Five replies.

Ref presents yellow cards to the fighting players. Keeper-with-juvenile-ponytail and Seventeen leave the field peacefully, but foam pours from Three’s mouth, and Fifteen has wrapped a piece of orange net cordage around her own neck. Her face turns the blue of her jersey. Ref sighs, stuffs the yellow card back in his pocket and whips out a red card instead.

Three combusts, blackening the turf. Fifteen loses consciousness. Ref shakes his head as the ball sails by him into the rafters. The remaining players on the field have decided to continue the game on their own, even though Ref never blew the whistle. Even though he never said, “Play on.”

Ref follows the ball as it arcs beneath the dangling fluorescent lights and lands inside the pub beside the spectator’s lounge.

“My ball,” Ten replies, charging by. She kicks the air, and the air goes into the top right corner. Nothing but net.

“It was your pass,” Ten replies, jovially punching Twelve’s arm.

Ref looks at the clock. Seconds count down. There’s no time for another kick-off. He looks at the Away bench. The players appear to be eating Four. A head rolls onto the field and stops at Center, where the ball should be.

Ref points to the scoreboard and blows his whistle three times to signify the end of the game. The teams spill onto the field, collapse into each other and shake hands.