Enfolded in the hills of southern Vancouver Island, a two-storey house still stands in the center of a small acreage. When I dream of home, I dream of this house. I lived there until I was ten years old.

My dreams of the house are visceral. I feel the coarse loops of the carpet, I know the shape of light the dining room window casts on the far wall. When I awake, I am so full of longing that I feel as if I’m returning to dry land after breathing underwater.

Maya Angelou says, “I believe that one can never leave home. I believe that one carries the shadows, the dreams, the fears, and dragons of home under one’s skin.” I have not lived in that home for many years, and yet I feel as if I have carried a piece of it with me since I left.

Like the connections we form to our parents, the physical place in which we grow up—both the building and the surrounding geography—imprints itself on us as infants and helps to build a sense of security, what Alain de Botton calls a “psychological sanctuary.” Our childhood home is part of a powerful set of memories that goes to the very heart of who we are.

In my childhood, my home was the place from which all my feelings of belonging originated. Everything about it was magical to me—the crawl space where we stored Christmas decorations, the cookies that emerged from the kitchen—and the landscape, such as the ooze in the pond and the garden and its rows of corn and peas.

I once found a bunch of carrots growing in the unkempt grass on the edge of the lawn, several feet from the garden. When my father dug them up, out came perfectly formed, foot-long carrots, bigger than any we had harvested from the garden. “They must’ve grown from a seed packet I tossed away,” he mused. I thought of Jack and his beanstalk.

There were dragons at home, though. Divorce came, a bitter crisis that left us all shattered. My mother stayed at the house with my two sisters and I moved out with my father. I was ten.

My father told me I was lucky to be with him, I was better off away from my mother because she favoured my sisters. This seemed to make sense—my father was only trying to protect me. He assured me that the new house he was going to build would be good—better than the old one.

Simply living somewhere does not make it a home. That sanctuary that we all seek cannot be created instantaneously. It takes time. And familiarity. And so many unnamable things, individual to each inhabitant.

In the early twentieth century, the modernist architect Le Corbusier sought to strip away architectural affectation in favour of simpler forms. When he was commissioned to build homes for factory workers in France, he designed apartments that had bare concrete walls and naked light bulbs. Gradually, the tenants began to transform the apartments: “Unconcerned with spoiling the architect’s design,” explains de Botton, “the tenants added shutters, flowered wallpaper and picket fences.” Over time, the tenants were able to create a sanctuary away from the grimness of the factories by imbuing the apartments with their own identities.

Although I tried to convince myself that my new house was as good as the old one, in truth I looked for my old house everywhere—even the surrounding landscape was not beyond my scrutiny. Behind the new house was a small marsh and sometimes I would clamber through the brush to stand on the edge, breathe in the familiar smell of skunk cabbage and imagine that this was just like the pond at the old house. But it wasn’t.

Where before having friends over was as easy as a knock on a door, it now involved phone calls, conversations between parents, strict curfews. The new house fulfilled the criteria of Le Corbusier’s “machine for living in,” but I know that I never felt at home there. And I did not have the autonomy that the factory workers had to transform the house myself. 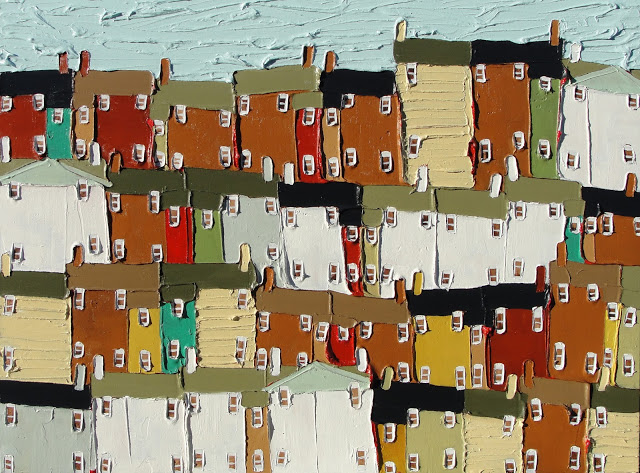 Nine years after my parents’ divorce, I moved out to attend university in Victoria. That same year, my father moved into a new house. My mother had long since left the old family house and so suddenly, I had no childhood home. It left me feeling adrift. So began my moving years.

Built around the school calendar, the moving cycle would start in the autumn: my regular roommates and I would find a place in September and disperse when classes ended in April. I stopped returning to my father’s house in the summers and so would move again. I could have found a cheap apartment and stayed put, but I didn’t. I just kept moving.

In September, my roommates and I would regroup and find a new place to live. We had become fast friends, four young women in our twenties and precocious to no end. We cooked, made wine, got robbed, fell in love but, eventually, each of them finished school and moved back to their hometowns. Except me. I stayed in Victoria, but kept moving.

I became an expert at it. I used every container available to avoid the hassle of finding new boxes: I packed blankets and sheets in laundry bins, knickknacks went into garbage cans. I never unpacked drawers but simply removed them from the dresser and brought them to the moving van just like that. I kept all the boxes I did have for the inevitability of the next move. Over five years, I moved eleven times.

I never questioned what I was doing. “Geography has little meaning to the child,” Angelou says. “Since the child cannot control that environment, she has to find her own place.” I moved through my geography in a blur. Finding my own place was something I didn’t know how to do.

I was twenty-eight and living in Vancouver when I met John. I didn’t realize it at the time, but he was the love of my life. After a year of dating, we moved in together. I flattened all my boxes and tucked them into the basement, sure that the time to leave would soon come.

A year went by. I began to feel restless, would grow irate at the sheer amount of stuff we had. John had so much stuff. In fact, he kept not only his own stuff in the basement but stuff that didn’t belong to him, including stuff that belonged to an old roommate of his, Mark.

“I’m not throwing it away,” John said.

I hated Mark. I didn’t know Mark. “I’m not going to be the one who hauls it to the truck when we move!” I declared. I had drawn my line in the sand.

I wanted to move, I realized. Moving felt normal.

De Botton calls home a “guardian of identity…where we slowly resume contact with our most authentic self.” For years, I had kept the dragons of my first home buried beneath the preoccupation of moving. But now, I couldn’t move. What was I supposed to do with myself?

I put up coat hooks by the door. I found a coffee table for the living room. I hung up a poster from a museum in Scotland that John and I had visited together. Slowly, the apartment began to reflect my personality as much as John’s. My feelings of restlessness began to fade.

One day, John and I ventured down to the basement to do some reorganizing.

“Do you still need all these old boxes?” he asked.

“Yeah, but when exactly are you going to move?”

I put them all out with the recycling.

It happened when I was cooking dinner. When I was discussing Shakespeare with John over a bottle of wine. When I was washing the dishes. How did I get here? I’m home. My first home is still with me—all the dreams and dragons of it. I carry it close, but it no longer burdens me.

John and I still live in the same apartment. We replace washers in the taps, clean the windows, sweep away the dust that gathers in the corners as if by magic.

Sometimes, I fall asleep on the couch in the afternoon, dream of light shining green through maple leaves, of gravel roads. The furnace in the living room pings as it cools down and the sound follows me in my sleep. It will be the only noise I’ll hear until John opens the door and returns home.