A gale of wind blew across the land. Travelling over rushing rivers and unreachable mountain peaks, she looked for a place to rest. A safe haven. A home. For this wind had seen many far-off lands but never a place to call her own. Zephyr was her name. She could be a soft and gentle breeze, the kind that crosses your face on a cool spring day. But she could just as well become a roaring wind, one that sought to disfigure the face of our world and summon chaos in the fiercest form. She was a sleeping dragon, poke her, and you would be sure to release the wrath of one of mother nature’s most formidable demons. A Poltergeist of a wind, Zephyr was made to stir the waters and the branches of our great forests, to steal hats and wreak havoc as she travelled the world. 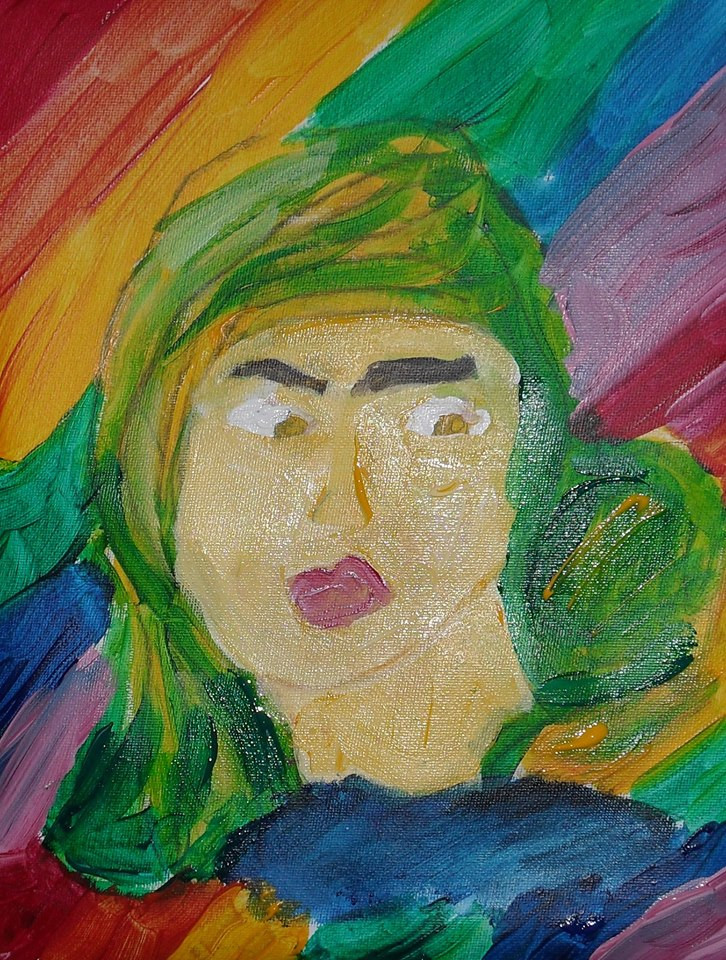 The Girl with the Green Hair after Michelangelo’s
The Delphic Sibyl, by Frøya Smith

One miserable night, when the rain pelted against the soil, Zephyr flew overhead. A storm was coming. Tendrils of her breeze stretched over the land beneath her, feeling for asylum. She found it: a cave off in the distance, clinging to the side of a mountain and cramped in size. It would do—though something was not as it should be. From the depths of the cave’s mouth, emerged a faint glow, flickering and feeble. She hastened her pace in pursuit of refuge and intrigued by the dying light. As Zephyr approached the mouth of the cave, she realised the light was a dwindling fire, his flames no longer dancing, his life waning.

“Hello?” called Zephyr, unsure if the fire would be able to return her greeting. He did not respond. “Are you alright?” she inquired. It was a rhetorical question but what else was there to ask?

The fire gestured slightly, his flames moving side to side, in what was clearly a “no.” Zephyr rushed to his side. Using her powers, her howling and fiendish gales, the kind of wind she was created to be, she summoned kindling from the forest. Small branches and twigs flew toward the cave, spinning through the air at a treacherous speed. They sung through the ether, hurling into the cave, to finally rest amid the fire’s embers. In a matter of seconds, they caught ablaze, sparks flying in a fit of spirit. Life returned to the fire, his flames roared and live coals crackled, caught in the wake of Zephyr’s mighty wind.

“Alive. I’m alive again. How? Why…?” He spoke in undertones, his voice trailing off as he interrupted himself. For a moment the two sat in silence. “You saved me.”

“I don’t understand.” He knew he should be dead. And yet here he was.

“Well, let me introduce myself, as you clearly aren’t going to.” The fire gaped at Zephyr. This stranger had just saved his life but she acted as though it were nothing. “They might call me the mistress of mayhem, the queen of the sky or the bringer of the windswept. But you may call me Zephyr, gentle breeze of the west.”

“Inferno. My name is Inferno.” No longer stammering, Inferno spoke softly. “Thank you. Just…. Thank you. Words cannot express the gratitude I feel towards you. You saved me from a treacherous fate, a painful death I would have endured alone. Thank you, Zephyr, mistress of mayhem, bringer of the windswept and gentle breeze of the west. I am forever in your debt.”

“You forgot queen of the sky.”

“Are you kidding?” Inferno screeched at this quarrelsome wind’s ability to infuriate. “I just thanked you for saving my life! And all you can say is that I forgot part of your title?”

A playful smile danced on Zephyr’s lips. This was the Poltergeist of a wind that most are familiar with. “I did just save your life. You should be more grateful.”

Inferno paused, considering his position. The wind did have a point. His flames turned a rosy red, as he blushed. “I’m sorry,” he said.

The two stared at each other then burst out in laughter. Zephyr’s sides shook as she laughed and her winds rushed through Inferno.

“Ahhhh!” He screeched in pain and swiped at her breezes, trying to push them away. Zephyr didn’t know what she had done. “You will kill me if you don’t watch,” he wheezed. “I am a fragile force, formidable, yet fragile. I can be broken by wind, rain and earth.”

Zephyr didn’t understand, she’d never met anyone opposed to her breezes, but then she hadn’t met that many creatures.

“It’s all about power and how it is used,” Inferno continued. “Who has it and who wants to take it. You have power to destroy or sustain. This is your choice.”

Zephyr listened. Inferno’s words brought forth deep questions and she searched her mind for answers. She realised that if she let down her guard, if she let her winds fall astray, she could hurt him. Zephyr had never felt this way before: All her life, she had been cold; now she felt warmth.

Light from the clearing skies shone into the cave. The ether was exposed and stars illuminated Zephyr’s shimmering form. Inferno watched as her breezes swirled in midair but at the same time hardly moved at all. He gasped.

“What?” Zephyr asked, fearing he was still angry.

“You’re shining,” he said, “like stardust.” And Inferno’s flames danced in the moon’s glow.

One thought on “Stardust”