In my forty-eighth year, in exchange for free rent, I chose to become an overnight caregiver to eighty-five-year-old Margaret, survivor of one broken hip and a stroke that transformed her speech into a restricted language of gravelly utterances.

My move from Vancouver to Salt Spring Island the year before meant work was hard to come by, though I did find a part-time job at the island’s employment centre. One morning, I answered a call from a woman seeking a caregiver for her mother. I toyed with the idea. I’d just finished caring for my own mother: midnight trips to emergency, regular visiting, and lending a hand as she struggled with kidney failure. I wondered if my willingness to consider this new arrangement had something to do with missing a mother figure. I accepted the role—and became one of Margaret’s seven caregivers in an around-the-clock caregiving relay.

I am not a patient person. I do not suffer fools gladly. But with Margaret I was patient because she was no fool and I’d made a choice. So, four nights a week, I climbed the steps from my tiny suite, surfacing in her living room at eight o’clock. All that winter, we travelled through India, courtesy of Knowledge Network. When Margaret tired of a program, there was no asking my opinion. Click. She was onto the next. I remained quiet and tended the fire. The least I could do, given her lack of privacy, was leave her be with her thoughts. Every evening at nine, she clicked off the TV and her burgundy La-Z-Boy propelled her behind upwards until her feet touched the floor: bed time. I squeezed past her like security clearing a path for royalty. I picked up crumpled Kleenex, ensuring path from world-of-chair to bedroom remained obstacle-free. My fingers, hints at her elbow, guided her.

When I helped Margaret change into her nightgown to ready for bed, I snuck glances at her naked flesh. Her white breasts reminded me of cake decorating bags emptied of icing. After her flannel nightie had been slipped over her head, and she lay back down, I’d ensure the bulky material was not bunched underneath her. Sometimes it required all her strength to lift her small bottom millimeters off the bed as I reached up mimicking an obstetrician preparing to yank out a breach baby. I’d whip down the material in a most unceremonious fashion and my maneuver never failed to make her laugh. 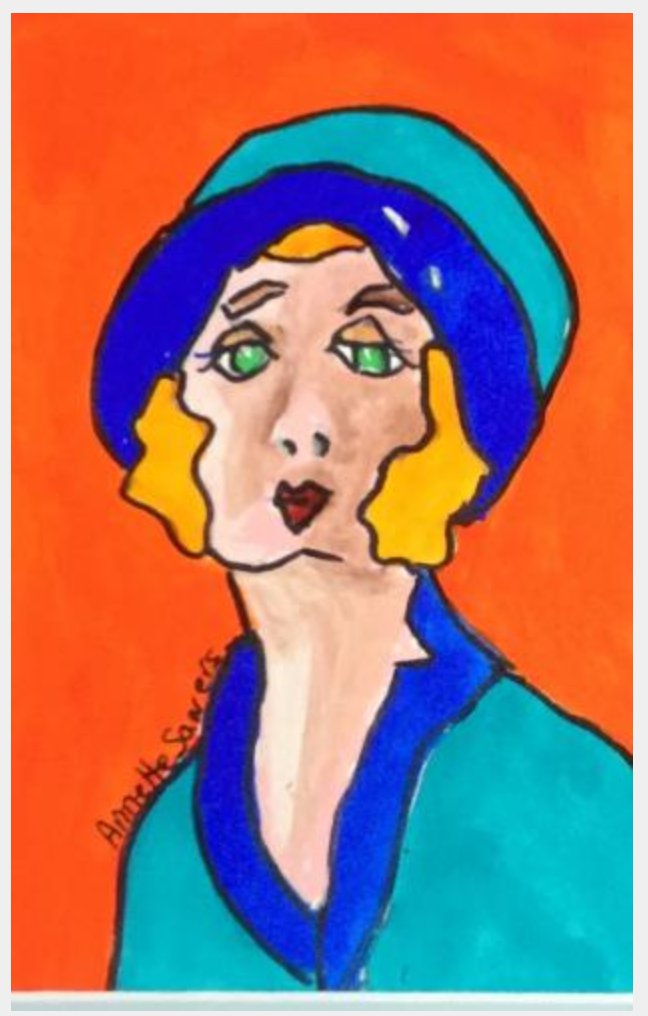 Once she was settled into bed, I moved about the house, apparition-like. I set the table for the next morning and stared at photos, younger versions of my elderly charge. There she was leaning up against a wall in a dusty back street in a hot foreign country. What had her adventures been? I’d then go to sleep in the adjoining upstairs bedroom where I stayed the four nights I was “on duty.” At seven the next morning, I’d pad quietly towards the kitchen. I’d stare outside while stirring the porridge, watching timid deer tiptoe down the road. I’d gather ingredients for Margaret’s special shake: flax, hemp hearts, blueberries, yogurt, soy milk, and chia. The whir of the blender signalled that breakfast was ready. Everything was timed. Shake. Porridge. Fair Trade coffee. Toast. Margaret definitely liked her routines.

I became nun-like in my service to Sister Margaret. Small acts of repetition measure out a lifespan. It didn’t seem that long ago that I’d been a child, listening to the cacophony of my own mother’s placement of cutlery on our family’s breakfast table, rarely time made for social intimacies with her children. I began to wonder about myself at eighty-five. Where would I be? Who would care for me? Would I still be at all?

Sometimes I couldn’t predict what would make Margaret laugh, like the day she pushed the button on her Life Force alarm. “My head. My head doesn’t feel right,” she said. I thought she might be having another stroke. When I returned from calling the ambulance she was chuckling.

“Why are you laughing?” I asked, annoyance in my voice.

“The look on your face,” she said, laughing more softly.

On a good night, it was what I didn’t hear that mattered. I didn’t hear that brass bell beside her bed jarring me awake. I didn’t hear my name being called out in darkness, though if I did, I could pounce through the adjoining bathroom in under a minute. I’d arrive tense and bleary-eyed upon a half-lit scene. The water glass had toppled. She’d be splayed on the carpet, as flexible as Gumby, that childhood toy.

Before her latest fall, I’d drive her the ten minutes to St. Mark’s Anglican Parish for morning meditation. The short, steep road leading to the church cast me as a reluctant character in a Margaret Laurence novel. I’d park the car and hover, moth to flame. She’d push her walker, its metal parts jangling across the gravel parking lot. Inside the musty museum of Christianity, a handful of others at the front of the sanctuary would greet us. I’d sink into the brilliant collage of light twirling through stained glass and inhale the whiff of polished mahogany. The red rug transported me back to my own Sunday school days. I’m beside my grandpa there. His cane taps its Presbyterian way, braille-like, towards his pew. Halfway through the sermon, he unwraps a Lifesaver and hands me one. Our very own religious ceremony. Following childhood, I rarely found myself in a church—until, that is, I returned with Margaret. The calm and the quiet. The feeling of being close to an elderly person and yet with others nearby, not solely responsible for Margaret’s well-being. St. Mark’s engulfed me like a reprieve.

When I agreed to my new living arrangement, there was no indication of the battle brewing between Margaret’s three adult children, her doctor, and her bevy of caregivers, a battle every bit as contentious as a child custody dispute. The disagreement centred on Margaret being moved off her beloved Salt Spring Island into a Victoria care facility. Margaret preferred to stay. Her caregivers needed their jobs. Her daughters were bent on a mission of removal.

Initially, I’d emailed her eldest with updates. I hadn’t even considered Margaret’s privacy. Only natural, I thought. Kids should know. Within months I felt like an informant. Who else was seeing my words? Secret meetings among the other caregivers reached epic levels. Whispers everywhere.

As Margaret’s condition deteriorated, her middle daughter scoured Victoria for the perfect care facility. “Best for her,” she told me. The eldest daughter agreed: “She hands over six thousand a month in caregiving!” I tried to imagine what it would feel like to have to pay people to care.

One rainy morning in March, I awoke to footsteps and muffled voices overhead. A short time later, there was a knock at my suite’s door. “They’ve gone,” said the middle daughter, meaning Margaret and the eldest were enroute to Victoria. Her husband got busy changing the locks. I wondered whose access, specifically, they were barring. They handed me the new keys in keeping with a verbal arrangement we’d had from day one: “Regardless of what happens with mom, you can stay in the house.” For insurance purposes, I’d assumed.

I felt queasy after Margaret left. Had she agreed or had she gone under duress? We never spoke of these matters: caregivers overstepping boundaries; middle-aged children kidnapping elderly parents to deposit them in places where others got paid to do what they couldn’t or didn’t want to do. Margaret didn’t talk very much, and when she did I found her hard to understand, so we kept communication to a minimum. But all by myself in her house, Margaret’s presence loomed in her empty La-Z-Boy, in the absence of our morning routine, and in her lingering personal scent. I moved out within the month.

Throughout my ten months with Margaret, I often thought back to my former life in Vancouver where I’d spent a few hours a week volunteering at the cardiac wards at St. Paul’s Hospital. I delivered warm blankets, filled water glasses, got ice, and diverted minds from upcoming operations. My first shift was nerve-wracking. Instinct told me when to go and when to stay by the bedside. Patients surveyed me with curiosity. Tubes snaked out of blankets and slithered down bare legs. There was no predicting which patients would inexplicably delight in showing me their serger-line scars.

“I’m not a nurse,” I’d said, urgently, the beeping of their heart monitors the white flags of fragile reassurance between us. “Just a volunteer.”

After a few hours, I’d lock my red smock away and head down Robson Street. My heart felt lighter. It was as if, patient by patient, loving angel hands had woven fuzzy threads around my own heartbreaks. I was the baby in a family that didn’t know lovey-dovey loving. Except with my closest friends, I’ve always held my connections at an orchestrated distance; independence has meant separate, in control. Before I volunteered at the hospital, before I cared for my mother and cared for Margaret, I would not have called myself a caregiver. I was a caring person, but never had responsibility for anyone. I didn’t even babysit as a child.

But somehow, by putting myself into these situations, just the simplest form of responding to people’s needs, being there for ten minutes or an evening, I realized it was something I craved. It felt good. It felt like I belonged. Despite my single, childless status, my unheralded acts of service have added me to an evolutionary line of caregivers eternal. Small ceremonies. Daily life. Heart open.