Got up, had coffee, got a little girl going.

Drove across town to a friend’s to help her pack — and score some of her clothes (long story).

Weeded parts of the back yard.

Attempted to put in a new bar top, found it slightly too big.

Put in a load of laundry.

Obsessively checked email for responses to a few client questions.

Emailed out another question.

Posted a challenge on a neighborhood board.

Delivered exchange student to her next place.

Picked up a few things at the other house (longer story).

Now off to a circus show.

Husband away on business trip, seems my brain has turned to mush!

Not very sleepy tonight; must be the 13 hours sleep I had. (Sore hip, took two codeine instead of two aspirin. Mental note: must move bottles to two different locations.)

Found my keys, after looking everywhere, and the house is cleaner as I cleaned while I looked for them. Does seem I am the messy one in this marriage; keeping that to myself.

Found keys on my desk in my office, so maybe I am not going batty. But then again, found my cell that I dropped in the driveway on my journey from studio to house, less than a two-minute stroll, and my glasses that were missing for days on the lawn–must have been when I went to feed the fish. Talking of which, have not seen the fish for days. Bloody hell, don’t say I have lost them too….

We had a wonderfully literary afternoon on July 27 at the Second Story Women’s Centre. Three local authors read from books released earlier this year. 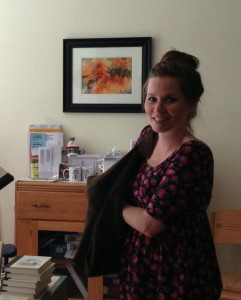 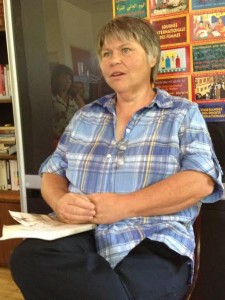 Linda Little read from Grist and poetically described the life of Penelope, a single mill-owner in nineteenth-century Nova Scotia. 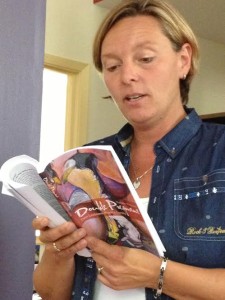 Thank you, readers and audience!

Between 6:00 am and 4:26 pm, I did the following not-so-brilliant but time-consuming things:

I went for an early walk access what traffic was on the water. Went in front of red buildinged (my computer doesn’t like the word ‘buildinged’) Adams and Knickle, onto the Public Wharf and subsequently onto the Railway Wharf before shooting up to Montague Street, going up-hill ever after back to my house. I watered the garden on my return, forgetting that rain was in the forecast, and pulled up some weeds and cleared yet more leaves and branch debris from the hurricane before going into breakfast.

Errands loomed. I bought some hot tea on the way to Bridgewater. I had a very long list of to-do’s and it was a good thing I fortified myself with tea because I found myself behind a long line of cars going 20K under the speed limit. I slowed down, sipped and took note of my surroundings. I noticed that once the front car got to the 50K zone in Dayspring it sprinted up to 70K.

The weather had turned to deep cloud cover and the river water was ruffled. Wipers were needed.

I picked up some ‘white’ black-out fabric to rejig curtains for my son’s temporary rental. The fabric is $8.99 a metre at Atlantic Fabrics in Bridgewater and 10% off today. He will enjoy a total black-out, I was promised by the person helping me. He does manual labour and he needs his sleep. Evidently there is an extremely bright light standard outside of the bedroom windows of his flat in the commercial district where he has taken up residence.

The saleslady said to me: “Why doesn’t your son do what our town counsellor did?”

“What was that” I asked?

She said with the most serene look on her face, “Why just have the light standards dug up and removed. He did not want to put up curtains so decided that the lights just had to be removed.” She elaborated that the community fought back and demanded that the standards be put back for safety reasons and now the ongoing struggle revolves around who will pay for them to be re-installed: the community or the counsellor. La lucha continua.

Further, I bought handles and knobs at Canadian Tire for a bureau I am going to paint for two of my grandchildren. The project is to turn a garage sale item into something funky and cheerful. I settled on a turquoise paint I used on a bench in my studio thinking there is lots of it left so why leave it to waste? My son is a single father now and needs a little help with some finishing touches after the move and I am only too happy to oblige. In fact, I am on board to help him get settled in any way I am able to. (I would do it for you, too, if you asked.)

I went to the Atlantic Superstore and while buying milk, being careful of the expiry date, I also saw some amazing bright red cereal bowls for 74 cents each. Who could resist? I bought them for the grandchildren and their father.

Returning home, I sent a text (I texted?) to a friend to make an appointment to have some tea and a chat tomorrow. No firm plan as yet. It is not easy to nail down a tea time.

I began to get nervous about using the word “texted”. So, off to google.

tr.v. text·ed, text·ing, texts
1. To send a text message to: She texted me when she arrived.
2. To communicate by text message: He texted that he would be late.

Lunch was a promised “Perfect Tuna Salad Sandwich,” a snipped recipe I captured from the Internet, along with some rhubarb tea made from my hard-won rhubarb patch in the yard. The tea recipe came from a well-spent $3 on a 1997 edition of Good Things: A Collection of Inspired Household Ideas and Projects. This was a good Frenchy-find.

Much time was misspent walking to the Fishery Museum of the Atlantic, not once, but three times back and forth from my house on the hill. The project I set out for myself was to photograph some items at the museum as reference material for a canvas I have been painting. The first time I clicked the camera, it left the message that I had not put my SD card in before I left home. Yes, it was sitting in my computer. Not pleased with myself, I walked home, retrieved the card and then walked back down the hill to the Fishery Museum. I got sorted out in front of the same display and the camera communicated to me again, only this time it said that my battery had just run out. Undeterred, I walked back up the perpendicular hill to get a second charged battery. Third time lucky.

Throughout the day, I had been reading, Steal Like an Artist: Ten Things Nobody Told You About Being Creative by Austin Kleon (a very useful little read), Images of Lunenburg County (for research), and Madness, Rack, and Honey: Collected Lectures, by Mary Ruefle.

One last item I worked on, something I relish, writing Trip Advisor.ca reviews of restaurants, hotels, events. I would say I have more readers than do most poets in Canada. Every so often, I get a notice saying that 6542 (and mounting) persons have read my reviews and that they were helpful for the traveller. (BTW, my computer insists I am spelling traveller wrong, but I am a Canadian and it seems to favour the American. There it is again, another red line for favour.)

Throughout this day I’d been flogging myself wondering if I can get back into my studio and paint before dark falls….

Check Goodreads or Indiebound, and you’ll find a virtual bookcase of writing guides: books on verse, dialogue, and plot; books for academics, Christians, and preschoolers. Precious few, however, have been created for women. Of course, women don’t always need or want gender-specific writing advice, but for some of life’s changes and challenges—motherhood, for instance—tailored guidance can provide just the right incentive and inspiration.

In the first in our blog series, Three Quick Reviews, we suggest three women-centric books on the craft of writing. 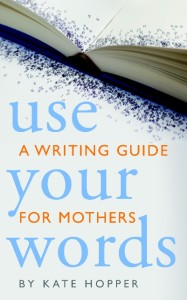 Use Your Words: A Writing Guide for Mothers
Kate Hopper
Viva Editions; 2012

In this excellent guide to creative nonfiction (CNF), Hopper draws on her life as a writing teacher and mother as well as on her memoir, Ready for Air: A Journey Through Premature Motherhood. She covers essential elements of CNF such as finding a voice, choosing a tense, reflecting on personal experience, and getting published. Hopper also advises on aspects particular to mother-writing: dealing with pain and fear, revealing details of family, and finding humor in the everyday. Many examples of published CNF illustrate how these elements work. Enticing exercises invite new writers to get started and experienced writers to hone their craft. 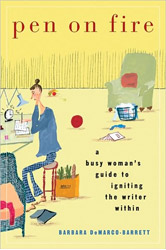 Pen on Fire: A Busy Woman’s Guide to Finding the Writer Within
Barbara DeMarco-Barrett
Harcourt; 2004

DeMarco-Barrett begins with that gigantic, looming hurdle to a successful writing life: time. We’re busy. We have families and jobs and a messy kitchen and an urgent deadline. When could we possibly write? Now, she says. Write in those few minutes before the kids wake up or that single minute while the kettle boils. You don’t need a quiet morning and a cozy office, just a notebook and determination. In short, engaging chapters, DeMarco-Barrett provides advice on getting organized, avoiding distractions, mining your life for ideas, and polishing your drafts—even if that draft is written on the back of your kid’s homework. 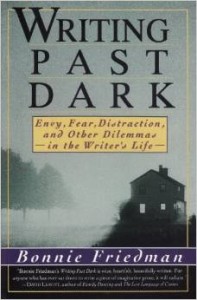 While not explicitly for women, Writing Past Dark, deals with emotional obstacles to the writer’s life felt, perhaps, more keenly by women. Friedman says she wrote the book because “I wanted a companion I could reach for” during the lonely writing process. Historically, women have been lonely, isolated writers indeed. But even now, the new mother who ekes out time for a blog, the single mom who gets up early to write poetry, the MFA mom in the midst of the “ten-year nap” who watches childless colleagues publish books and win awards—these women surely feel the envy, fear, distraction, and paralyzing writer’s block Friedman describes so beautifully.

Do you have a favourite writing guide? Can you recommend a guide for women or mothers? Do you have an idea for our next Three Quick Reviews? Add a comment to this post or email your idea to editor@understoreymagazine.ca